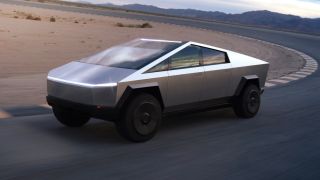 The Tesla Cybertruck was rolled out in November.
(Image: © Tesla)

With a collective gasp and puzzled looks, the world was recently introduced to Tesla's newest vehicle. The so-called Cybertruck is an angular, stainless steel, all-electric pickup truck that quickly became polarizing.

The launch didn't go very smoothly. The truck's windows shattered when its lead designer smashed them with a metal ball, causing Tesla founder Elon Musk to curse under his breath. Some love its futuristic look. Others hate it. Even Lego made fun of it.

The evolution of the truck is here. Guaranteed shatterproof 😬 pic.twitter.com/RocTEkzzwINovember 27, 2019

Regardless, pre-orders for the Cybertruck approached 250,000 within a week. Such an explosion of interest with no advertising, and an arguably disastrous grand opening event, is probably unprecedented.

On a global scale, it's clear that electric vehicles — known colloquially as EVs —have reached a new level of public acceptance. As of 2018, more than five million EVs were sold around the world. Canadians have been somewhat slower at adopting this technology, with all-electric vehicles representing 1.2 per cent of sales in 2018, or approximately 46,000 units. That said, Canadian sales of EVs grew 165 per cent year-over-year in 2018.

With the Cybertruck, Tesla has integrated several of its technologies into one offering. The truck features the same stainless steel alloy being used at Musk's other company, SpaceX. And it has lithium ion batteries, software and hardware for self-driving and a solar roof option to help boost the Cybertruck's range.

The efficiency of most gasoline engines is between 17 and 21 per cent. For EVs, the conversion of electrical energy into power to drive the wheels is 59 to 62 per cent. This gives EVs a clear performance advantage. The cost of operating EVs — including fuel and maintenance — ranges between 65 per cent to 77 per cent less across Canada than it costs to drive and maintain gasoline-fuelled vehicles.

Due to its weight and size, Tesla's Cybertruck is likely to be somewhat less efficient than the electric passenger cars currently available. However, when compared to other non-electric trucks, the inherent efficiency advantage of electric motors and the aerodynamics of the Cybertruck are substantially better.

EVs are rapidly becoming a core part of our transportation future. They offer the potential to significantly reduce carbon emissions.

Even in oil-friendly Alberta, where the grid is powered mostly by fossil fuels, the case is being made that EVs offer both environmental and economic advantages. They're an important tool for reducing air pollution, for example, which costs the Canadian economy billions of dollars every year.

The Union of Concerned Scientists issued a report in November 2015 that concluded:

"Based on where EVs are being sold in the United States today, the average EV produces global warming emissions equal to a gasoline vehicle with a 68 mpg (miles per gallon) fuel economy rating."

In the same report, a life cycle analysis that included both the operation as well as the manufacturing of vehicles shows that a full-size EV has approximately half the environmental footprint of a full-size, gasoline-fuelled car.

Vehicle-to-grid (V2G) technology is also being developed around the world. V2G allows EVs to use chargers bidirectionally to turn them into mobile storage solutions — meaning EVs could help balance electricity supply and demand by making the vehicle's battery system part of the overall grid infrastructure. Vehicles could be used to store energy during periods of over-supply and provide top-ups to the grid during peak demand hours.

With its massive battery pack, Tesla's Cybertruck is particularly suited for V2G use. The vehicle will also come with a 120 volt/240 volt AC power outlet that may be able to power homes during blackouts or brownouts. This is something currently done with other EVs using what are known as aftermarket inverter kits. Nissan has been working on similar technology in Japan with its Leaf vehicle.

Indeed, the Cybertruck will face serious competition from other manufacturers in the lucrative and growing pick-up truck market. Rivian and Bollinger already have electric trucks ready for pre-sale or sale, and Ford is releasing an all-electric version of the popular F-150.

Tesla has two main advantages that will likely make the Cybertruck a winner.

First, Tesla has an advanced and extensive charging network that allows the owners of its products to quickly refuel. There are currently more than 14,000 superchargers worldwide.

Second, Tesla has invested heavily in battery technology and manufacturing. Its gigafactories are expanding and using more renewable energy, including solar power, to reduce the ecological footprint of batteries. As a result, Tesla is able to scale up production and will probably be able to keep the cost of its vehicles lower than competitors.

Tesla's Cybertruck and the growing number of offerings by other manufacturers of EVs likely represent the beginning of a larger transition away from internal combustion engines.

"The economics of oil for gasoline and diesel vehicles … are now in relentless and irreversible decline."

To remain competitive with EVs, the investment firm calculates that the break-even point for gasoline is no more than $10 dollars a barrel, and for diesel, $17 to $19 a barrel.

The environmental advantages of electrifying transportation are significant and undeniable. EVs are also a pleasure to drive — they're quiet, clean, fast, inexpensive to operate and perform well in all weather conditions.

Love it or hate it, Tesla's Cybertruck is a game-changer.

[Deep knowledge, daily. Sign up for The Conversation's newsletter.]