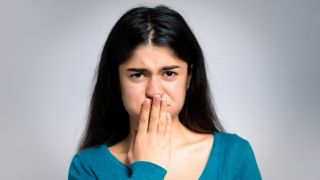 Why would your body try to stop you from eating when you haven't eaten for a while?
(Image: © Shutterstock)

You wake up late, rush out of the house and get pulled into a meeting as soon as you walk into the office. Breakfast never happens, and by the time you sit down to lunch, it's been nearly 15 hours since your last meal. You should be starving, but instead, you feel nauseous.

How can that be? Why would your fasting body make food less appealing when it needs it the most?

One of the most common reasons for the phenomenon is easy to understand, said Christine Lee, a gastroenterologist at Cleveland Clinic. Your stomach produces hydrochloric acid as a part of the long process of breaking down food, using what it can for energy and materials, and disposing of the rest. If you don't eat for an extended period of time, the hydrochloric acid can build up in the stomach.

"When it sloshes up into the esophagus, it can cause acid reflux, heartburn and nausea," Lee said.

Another set of possible reasons for feeling nauseous when hungry has to do with your body's network of signals for knowing when to eat. These signals are regulated by the endocrine system, a system of glands (including the pituitary gland, the thyroid gland and the pancreas) that uses the bloodstream for chemical communication..

Hormones generated by the endocrine system' give your body the information it needs to keep its chemical levels balanced. For example, to maintain healthy blood sugar levels and support a wide range of bodily activities, you need calories Your stomach sends signals to the endocrine system that trigger the release of hormones; these hormones tell the brain, "Give us more calories " or "That's enough." A lot of hormones are involved, but two important players are ghrelin and leptin.

"Ghrelin is supposed to cause hunger," Lee said. The hormone was discovered in 1999, but since then, researchers have identified ghrelin as a key player in a number of important processes in the body, including gut motility, gastric acid secretion, taste sensation and glucose metabolism.

Leptin has  the opposite effect: It counters ghrelin by decreasing appetite. There are many other hormones involved in feelings of hunger, but the interplay between ghrelin and leptin is key in the healthy ebb and flow of appetite.

"When your body is in a normal state, these hormones auto-regulate," Lee said. "You should only have a few signals" throughout the day gently reminding you to eat.

But that chemical balancing act can be thrown out of whack if you ignore your hunger signals and don't eat regularly.  Go long enough without eating, and your body will try to coax you into eating by producing more ghrelin.

"When the hormones go up, they're supposed to increase your appetite," Lee said. And in most people, most of the time, that's exactly what they do. But not always.

"Some people have higher sensitivities to hormonal levels," Lee said. Variation in sensitivity and other factors lead some people to experience light nausea when they're extremely hungry. Cases of more severe nausea symptoms, however, could hint at a disorder.

"If your signals are intense enough that you get nausea or pain, that could be your body telling you that you need to be screened for metabolic syndrome" — conditions such as high blood sugar, abnormal cholesterol, increased blood pressure and high blood sugar — which can lead to heart disease, Lee said.