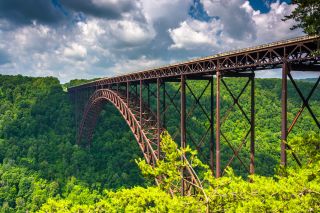 West Virginia has 412 confirmed cases of COVID-19 after testing at least 12,059 people. Four people are confirmed to have died from the illness in the state, according to the West Virginia Department of Health and Human Resources. This makes it one of the states with the fewest confirmed US coronavirus cases.

Some COVID-19 patients in West Virginia reported serious difficulties getting tested in the earlier phases of the crisis, although testing has since sped up significantly in the state. Gov. Jim Justice said April 7 that 0.559% of West Virginians had been tested compared to 0.592% nationwide. This map keeps track of all available testing sites in West Virginia. The state asks that you call your doctor for medical advice before visiting one of these sites More information on testing criteria in West Virginia is available here.

There appears to be an outbreak at the Eastbrook Center Nursing Home in Charleston, according to the governor's office's April 7 statement, with four patients and one employee testing positive. Sixty-nine have tested negative and 52 tests from the center are pending, with some employees still not tested.

A first "community cluster" was identified in the state's Eastern Panhandle region, according to a statement from Justice, with 60 positive cases identified across Berkeley and Jefferson counties. Justice said that this first  cluster likely resulted from the Shenandoah Valley counties' proximity to a major city, Washington D.C.

Justice issued an series of executive orders April 3 and April 4 further limiting public gatherings in Monongalia, Harrison, Kanawha, Berkeley, Jefferson, and Morgan counties, where 62% of the cases in the state had then been found. The order limits groups to five people, instructs businesses to keep their workers home as much as possible, instructs county health departments to set local rules, and sets the state police about enforcing the rules. He also ordered the state's National Guard to provide logistical support to counties.

On March 30, Justice issued an order requiring "out-of-state citizens" to self-quarantine for 14 days, and charged the state police with enforcing the order. The order also closed all state park campgrounds.

"For those who are crossing our state lines conducting interstate commerce, or commuting for work or essential business, military duty or health and medical care reasons, we don’t want to impede you," Justice said in a statement, adding in a statement that the order is aimed at preventing people from areas with known hotspots from spreading the illness to West Virginians. (It's not clear that all hotspots are actually known, or that out-of-state visitors are driving infections in West Virginia.)

On March 23, Justice issued a “Stay At Home” order to West Virginians.

“It’s important that all of us understand the magnitude of this situation today,” Justice said in a statement. “The magnitude is unbelievable. It’s the biggest event for any living person in the United States today, period."

The order prohibits visiting friends and family without urgent need, visiting hospital patients, and work outside the home not deemed "essential." It mandates that West Virginians maintain six feet of distance from one another.

Grocery shopping, essential healthcare errands like visiting a pharmacy, care for friends and family members, veterinarian appoinments, restaurant take-out, and walks, bike rides, and other similar activities are still permitted as long as six feet of distance is maintained. “This disease is really serious stuff. Please stay home, please listen to our order, and please in every way shape, form, or fashion keep consulting your God above and absolutely every one of us will get through this,” Justice said.

On March 19, the governor ordered the closure of all hair salons, barbershops, and nail salons. He also issued an order mandating the maximum provision of unemployment benefits to impacted individuals allowed under federal law.

On March 18, the governor issued an executive order limiting bars and restaurants to carryout, drive-through, and delivery. The order also shut all casinos in the state.

On March 17,  Justice mandated the closure of all restaurants, bars and casinos, according to Metro News.

On March 13, Justice announced that all public K-12 schools would be closed for the foreseeable future. Last week the governor issued a travel ban for all state employees and requested that citizens of West Virginia reconsider any non-essential travel. Government agencies were also told to avoid having large meetings or gatherings.