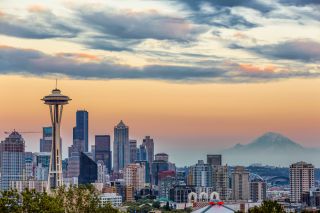 There are now at least 15,462 cases of COVID-19 in the state, mostly in King and Snohomish counties, outside of Seattle. At least 841 people have died, according to the Washington Department of Health.

In King County, 6,545 people have become infected and 463 people have died from the virus, with another 2,537 infected and 111 deaths from COVID-19 in Snohomish County. About 7% of people are testing positive, and the state has conducted more than 216,000 tests, according to the department of health. The state seems to have resolved its issues in reporting data.

About 33% of the positive cases are in people younger than 40. However, 99% of deaths have been in people older than 40, with about 52% of deaths occurring in those 80 years or older. Though more cases have been diagnosed in women, about 54% of men diagnosed with COVID-19 have died.

—More than 100 state parks reopened on May 5 for recreational day use. Gov. Jay Inslee also announced that entering "Phase 2" of reopening could come this week, including the reopening of retail for curbside pickup, construction and lawn care and pet walking. Other services, such as barbershops and in-store retail could be allowed by June 1, the Seattle Times reported.

—At the same time, a University of Washington model that has been widely cited has doubled the predicted number of deaths to occur by Aug. 4, to roughly 135,000, largely because of the relaxation of social-distancing measures. That model, however, has been criticized for failing to predict deaths or hospitalizations even a few days in advance, and for having wildly fluctuating estimates.

—A genetic analysis of virus samples from across the U.S. shows just how far a Seattle-area strain of the virus has reached, according to a report from The New York Times. Strains of the virus found in 14 other states, including Connecticut and Maryland, share a lineage with that strain, according to The Times.

—Inslee faced pushback on his stay-home orders; Adam Fortney, the Sheriff of Snohomish County announced in a Facebook post that he would not enforce Inslee's stay-at-home orders.

—Some parts of Washington's stay-home orders could be extended beyond the May 4 deadline, Inslee said in an address on April 21. However, elective surgeries, certain indoor construction and outdoor recreation could be potentially reopened fairly soon, assuming that the favorable numbers, such as lower case counts, continue.

"We can modify some of these restrictions in the coming weeks, if the health modeling holds up," Inslee said.

Before reopening, Inslee wants three pieces in place, he said: a massive contact tracing effort, scaled up testing and better resources to address homelessness and mental health issues.  Business reopening would be phased in slowly, while most social distancing would remain in place.

—The University of Washington Virology Lab is beginning to process thousands of antibody tests for the novel coronavirus. In theory, these tests can show if someone was previously infected with COVID-19. The ones being used by the UW lab are produced by Abbott Laboratories, Inc. Antibody tests can provide an estimate of the overall prevalence of the disease, but when few people in a population have been exposed, they can be prone to false positives, Live Science previously reported. Results from a different test, used in Santa Clara and Los Angeles County, have been questioned due to a high false positive rate. But the new tests seem to be better, Dr. Keith Jerome, director of the Virology Lab said during a press conference on Friday (April 17).

"We're not seeing any false positives with this test," Jerome said.

—Cases of COVID-19 are rising in the homeless community, according to Public Health -Seattle and King County. As of Monday (April 20), 112 people who are either homeless or work with the homeless have tested positive for the virus, according to KUOW.

—Gov. Jay Inslee gave the rough outlines of what an economic reopening would look like in the state. That opening would likely be phased, though details are still sketchy. Those that were closed last, such as nonessential businesses, could be first to reopen, while those that were banned first, such as large gatherings, would be the last to come back, Inslee said on Wednesday (April 15).

—The University of Washington Medical Center and Harborview will now test all incoming patients for COVID-19, in order to better protect clinicians caring for them, KUOW reported. Previously, only those who had symptoms were tested, but reports of asymptomatic patients testing positive prompted the change.

—Washington, Oregon and California have signed a pact to aid in the recovery of their economies. According to a statement, released by Inslee, Gov. Kate Brown of Oregon and Gov. Gavin Newsom of California,

"COVID-19 has preyed upon our interconnectedness. In the coming weeks, the West Coast will flip the script on COVID-19 – with our states acting in close coordination and collaboration to ensure the virus can never spread wildly in our communities."

The statement focuses on how to ramp up testing, improve contract tracing and prepare adequate amounts of personal protective equipment.

—The number of COVID-19 in nursing homes has doubled over the first week of April, according to the Washington State Department of Social Health and Services, which oversees nursing homes.

—There are conflicting reports as to whether there's an outbreak of COVID-19 on the USS Nimitz, which is stationed off the coast of Bermerton, Wash., before a scheduled departure, the Kitsap Sun reported. The Pentagon suggests cases do exist.

Gen. John Hyten, vice chairman of the Joint Chiefs of Staff, said Thursday, that the Nimitz does have cases.

"There's been a very small number of breakouts on the Nimitz, and we're watching that very closely before the Nimitz goes out," he said. "But it's not a huge breakout, it's not a big spike at this point."

—An EvergreenHealth emergency physician who was in critical condition has been discharged from the hospital, the Seattle Times reported. Ryan Padgett was put on life support, but improved after receiving the drug Actemra, an immunosuppressant approved for treating rheumatoid arthritis. This potential COVID-19 treatment inhibits the action of the inflammatory chemical interleukin-6 (IL-6). This chemical, IL-6, is elevated in people whose immune systems overreact in what's known as a cytokine storm. Though doctors can't say for sure that it helped Padgett improve, but studies are ongoing, according to Local12.

—The field hospital being set up by the U.S. Army at Seattle's CenturyLink Event Center will be moved to another state that has a greater need, KIRO reported. That information is more evidence that Washington's efforts and physical distancing are working to limit the spread of COVID-19.

"The hospitals here in western Washington are not at capacity right now and there’s a pretty compelling need elsewhere in the country as you can see," Robert Ezelle, the head of the state's Emergency Management Division, told KIRO.

—About 100 Inmates at Monroe Correctional Complex in Monroe, Wash. staged a protest in response to other prisoners testing positive for COVID-19. Six people n the Minimum Security Unit have tested positive for the virus, and were taken to isolation units, according to NPR.

—Congress members from Washington State have requested that the federal government provide additional testing sample kits. The state has the capacity to run many tests, but it can't run at full capacity because the state is is running out of supplies needed to collect specimens, KIRO reported.

—Thanks to the state's efforts at "flattening the curve," the state is no longer projected to have a shortage of ventilators. As a result, Gov. Jay Inslee announced on Sunday (April 5) that he is returning 400 ventilators to the National Strategic Stockpile, so that states in more dire need can use them.

"These ventilators are going to New York and others states hardest hit by this virus," Inslee said in a statement. "I’ve said many times over the last few weeks, we are in this together. This should guide all of our actions at an individual and state level in the coming days and weeks."

—Gov. Jay Inslee announced that the state's K-12 schools would remain closed for the remainder of the school year, until midnight of June 19.

—Inslee also extended the stay-home order for another 30 days, to May 4, to ensure the gains on the new coronavirus that were hard-won by social distancing efforts are not rapidly undone.

—The Food and Drug Administration (FDA) has approved a clinical trial of a Seattle-based immunotherapy for the treatment of COVID-19. The drug, made by Seattle-based Infectious Disease Research Institute and New Jersey-based Cellularity, is an infusion of natural killer cells (NK cells), a type of immune cell. In studies, patients suffering from COVID-19 pneumonia had low levels of these cells; the trial aims to deliver NK cells to patients with severe cases of pneumonia to see if it can improve outcomes, according to KOMO.

—The University of Washington is calling on people who have recovered from COVID-19 to donate plasma. Such "convalescent plasma" may be full of antibodies that could help patients fight off the disease. Early studies in China have shown hints of positive results, and a trial of such treatment is getting started in New York as well, Live Science previously reported. Those who are interested should email covidplasma@uw.edu, or call 206-520-4212 .

—At least 90 senior care facilities across the state have had an outbreak of COVID-19, according to an investigative report by the Seattle Times. Of the 517 patients and staff who tested positive for COVID-19 at these centers, 66 have died, according to the Seattle Times. However, a shortage of tests means that even when a confirmed case is diagnosed at one of these centers, they are often unable to test everyone there, making it hard to contain the spread.

Timeline of coronavirus in the state