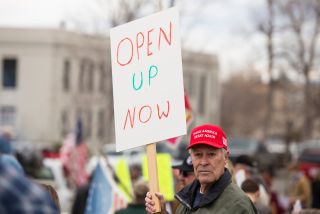 On April 19, a protestor in Helena, Montana holds up a sign to protest stay-at-home measures. Similar protests have taken hold across the country over the past couple of weeks.
(Image: © Shutterstock)

By June, there could be nearly twice as many coronavirus deaths in the U.S. and eight times as many cases reported as there are today, according to projections from an internal Trump administration document that was obtained by The New York Times.

Currently, the country's daily death toll stands around 1,750; but by June 1, it could reach 3,000 daily deaths, according to the projections that are based on models put together by the Federal Emergency Management Agency (FEMA). The models also predict that by June 1, the U.S. will log about 200,000 new COVID-19 cases every day, compared with about 25,000 new COVID-19 cases each day currently.

Despite the grim trajectory laid out by these private projections, which are labeled "For Official Use Only," President Donald Trump has been pushing for states to re-open and kickstart their economies. Indeed, despite a growing number of coronavirus cases in states including Texas, Iowa, Tennessee and Minnesota, governors are easing restrictions.

On Monday (May 5), the White House issued a statement saying, "this is not a White House document, nor has it been presented to the Coronavirus Task Force or gone through interagency vetting." Similarly, despite the document bearing the logo of the Centers for Disease Control and Prevention (CDC), the agency denied responsibility for the report, The Washington Post reported.

The creator of the model, Justin Lessler, an associate professor of epidemiology at Johns Hopkins Bloomberg School of Public Health, said the modeling wasn't yet complete and the unfinished projections, which contained a wide range of possibilities, were shown as a work in progress to government officials.

Lessler told the Post that he wasn't sure how these numbers were turned into slides by the government and shared with news outlets. "It was not in any way intended to be a forecast," he said. Still, these projections carry with them a warning that numbers can spiral out of control, he told the Post.

Another influential model from the University of Washington's Institute for Health Metrics and Evaluation (IHME) that's often cited by the White House, is now projecting that 134,000 people will die from COVID-19 across the country by Aug. 4, nearly double its previous projection, according to CNN.

There are several reasons for the uptick in projected cases and deaths in the IHME model, Ali Mokdad, a professor of Health Metrics Sciences at IHME told CNN. "One of them is increased mobility before the relaxation, premature relaxation of social distancing," he said. "We're adding more presumptive deaths as well, and we're seeing a lot of outbreaks in the Midwest, for example."

There are many factors that affect these numbers, but "the most important" is mobility, he said. Right now, "we're seeing an increase in mobility that's leading to an increase in mortality, unfortunately, in the United States."

In the case of the internal document, it's not clear if the high numbers were based on more testing, state reopening, time lags in cases or deaths or a combination of these, according to the Post.

These models may serve as billboards warning that relaxing social distancing while still riding up the curvy road can lead to devastating outcomes. The U.S. has been social distancing for seven weeks, but the outbreak is not nearly contained, as numbers continue to rise. The U.S. has confirmed 1.18 million COVID-19 cases and more than 68,900 deaths to date, according to the Johns Hopkins virus dashboard.