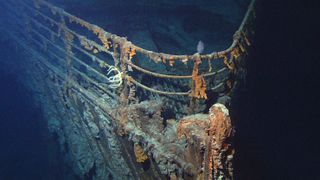 A proposal to cut the Titanic's telegraph machine free of the shipwreck was just approved in federal court.
(Image: © NOAA/Institute for Exploration/University of Rhode Island)

A federal judge has given a salvage company permission to cut open the hull of the RMS Titanic in order to retrieve the ship's famed Marconi Wireless Telegraph Machine, according to court documents.

The telegraph — sometimes called "the voice of the Titanic" — is notorious for sending out the ship's final distress messages on the nights of April 14 and 15, 1912, after the ship hit an iceberg in the North Atlantic and started to sink (ultimately killing some 1,500 people). The equipment sits within three adjoining rooms known as the Marconi suite, located on the ship's topmost deck, and has long intrigued salvagers at RMS Titanic Inc. — a for-profit company that won rights to salvage the Titanic and exhibit its artifacts in 1994.

Retrieving the telegraph might require cutting open the ship's hull with a remotely-operated vehicle (ROV), the company said, but a court ruling in 2000 prohibited them from doing so. That ruling also prohibited the company from removing any artifacts directly from the wreck (on later expeditions, the company removed thousands of artifacts from a debris field near the ship). Now, 20 years later, the company has successfully challenged that ruling, citing concerns that the room and its contents could be destroyed by deterioration if not recovered soon. (Some scientists are concerned that much of the Titanic could be destroyed by corrosion within a decade, Live Science previously reported.)

Related: In Photos: Stunning shots of the Titanic shipwreck

"The boat is sort of degrading… right at the Marconi suite," Bretton Hunchak, president of RMS Titanic, Inc., told Business Insider. "Our main concern is that it is going to be lost very soon."

Earlier this week, Rebecca Beach Smith, a federal judge in Virginia, ruled that "the Marconi device has significant historical, educational, scientific and cultural value as the device used to make distress calls while the Titanic was sinking," according to a court document. That coupled with the deterioration is enough to justify its removal, even if that requires "limited cutting" of the ship’s hull, Smith ruled.

Some organizations, including the National Oceanic and Atmospheric Administration (NOAA) oppose this sort of invasive shipwreck surgery, Live Science previously reported. In February, NOAA lawyers expressed concerns that RMS Titanic Inc. will use this ruling as a "placeholder" to gain greater access to the ship and its artifacts on future expeditions. The shipwreck is protected as an archaeological site according to an international agreement between the United States, the United Kingdom, Canada and France — an agreement that the company's proposed expedition flatly violates, NOAA attorneys said.

For now, the court ruling only grants permission for "minimal" cutting with the express purpose of recovering the Marconi telegraph. If possible, the RMS Titanic Inc. team will enter and exit the Marconi suite through existing holes in the ceiling, Hunchak said, but this may not be possible. The company's expedition to remove the telegraph could begin as early as August or September 2020, if the state of the coronavirus pandemic allows them to operate safely, Hunchak said.