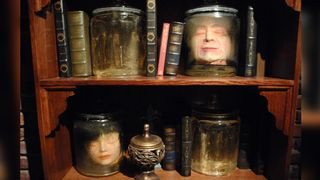 Ripley's Believe It Or Not Odditorium is known for its unusual objects, such as the display shown at Ripley's Times Square in New York City during its grand opening in 2007.
(Image: © Jason Kempin/FilmMagic via Getty Images)

A massive trove of "artifacts" has been shipped to Ripley's Believe It or Not! — a company known for its unusual objects. The artifacts arrived by ship in Miami on May 15, 2019, and were then sent to Ripley's Orlando headquarters.

The shipment, which consisted of three containers holding 125 artifacts, weighed a total of 43,155 pounds (19,575 kilograms), although that weight may include material used to pack the artifacts.

The shipment's bill of lading said that the artifacts was shipped from Colombo, Sri Lanka, but representatives for Ripley's say that the ship was passing through the port and that the artifacts were actually being sent from Innovative Studios Private Ltd., based in Bidadi, India.

Related: 30 of the World's Most Valuable Treasures That Are Still Missing

A Ripley's spokesperson said that the company was using the artifacts in Innovative Film City in Bangalore, India. Film city is where a popular Indian reality show, "Bigg Boss," is filmed. The film city also houses a number of tourist attractions, such as a "Tribal Museum," a "Fossil Museum" and a wax museum. The film city was reportedly damaged by a fire in February 2018, according to news reports.

The port where the artifacts passed through, Sri Lanka has been recovering from a lengthy civil war fought between the Sri Lanka government and a separatist group called the Liberation Tigers of Tamil Eelam. The war raged from 1983 to 2009, when the government captured the last territory held by the Tigers. During and after the war ended, looting of archaeological sites has been an ongoing problem in Sri Lanka.

Ripley's Believe it or Not! is a company that has a 25,000-piece artifact collection that focuses on all things unusual, including an elongated skull belonging to a Peruvian; shrunken human heads; the remains of several two-headed animals; and even an 8-foot-long (2.4 meters) portrait of Albert Einstein made out of toast. Some of these artifacts are displayed in "odditoriums" located around the world.

Innovative Studios Private Ltd could not be reached for comment.

Editor's Note: This article has been updated with comments from Ripley's, who say that the artifacts did not come from Sri Lanka, as Live Science had reported. They also made clear that the company does not use looted or stolen artifacts.