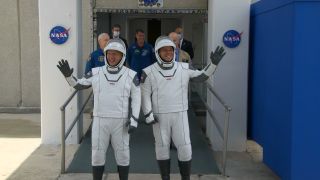 NASA's SpaceX Demo-2 crew members Robert Behnken and Douglas Hurley wave to their families, friends and support team members as they prepare to depart for Launch Complex 39A on May 27, 2020.
(Image: © NASA TV)

If all goes well, American astronauts will launch from U.S. soil to the International Space Station for the first time since 2011 on Saturday (May 30).

The SpaceX and NASA mission, called the Demo-2 mission, is a test flight of the private space company's Crew Dragon spacecraft and Falcon 9 rocket. It will deliver astronauts Robert Behnken and Douglas Hurley to the International Space Station (ISS) for a stay of undecided length.

The launch from NASA's Kennedy Space Center in Florida was originally scheduled for Wednesday, May 27, but was canceled due to bad weather with less than 20 minutes left to go before liftoff. The next opportunity for launch is at 3:22 p.m. EDT (1922 GMT) on May 30, and the launch will be livestreamed on Live Science.

Approximately 24 hours after reaching orbit, the spacecraft will dock with the ISS, and the two astronauts will join the current ISS Expedition 63 crew, which consists of NASA astronaut Chris Cassidy and Russian cosmonauts Ivan Vagner and Anatoly Ivanishin. The Crew Dragon is capable of remaining in orbit for 110 days; the length of the Demo-2 mission will be determined once the astronauts are on the station "based on the readiness of the next commercial crew launch," NASA said.

Related: Here's every spaceship that's ever carried an astronaut into orbit

The mission is the first opportunity for American astronauts to travel to the ISS from the United States since 2011 when the Space Shuttle program ended. According to NASA, Behnken and Hurley were the first NASA astronauts to begin training on SpaceX's Crew Dragon spacecraft. This crewed flight to the ISS is the final test flight of the SpaceX craft and all of its accompanying launch equipment.

If the mission is successful, NASA's Commercial Crew Program will certify Crew Dragon for regular missions to the ISS, where it will be able to spend at least 210 days at a time in orbit. This would make SpaceX the first private space company to become certified to fly crewed missions into space for NASA. It would also represent a major step forward for the U.S. space agency: Since the end of the Shuttle program in 2011, U.S. astronauts have relied on Russian Soyuz spacecraft to travel into orbit.

It's a toss-up as to whether the weather will cooperate for Saturday's launch. The U.S. Air Force's 45th Space Wing estimates a 60% chance of unfavorable weather that day, as well as during the backup launch window on Sunday, May 31, Space.com reported. If neither launch window works, the next opportunity could be on June 1.

Below is a list of NASA livestreams of the launch, courtesy of Space.com: