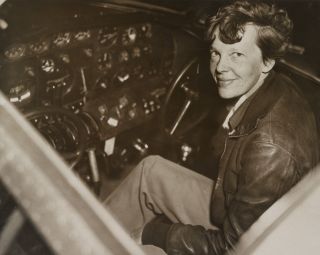 Amelia Earhart photographed sitting in the cockpit of the Lockheed Electra airplane around 1936.
(Image: © Shutterstock)

This summer, the explorer who discovered the shipwreck of the Titanic went in search of Amelia Earhart's lost plane. Two weeks and a multimillion-dollar search later, Robert Ballard said he has found no hint of it, according to The New York Times.

Earhart and her navigator Fred Noonan disappeared over the Pacific Ocean 82 years ago — on a journey that would have made Earhart the first female aviator to circle the globe. Her vanishing has led to numerous search efforts and spawned several conspiracy theories, but no one has been able to find conclusive evidence as to where she might have gone.

One theory, advocated by the nonprofit The International Group for Historic Aircraft Recovery (TIGHAR), is that her plane, the Lockheed Model 10 Electra, crashed into the coral reefs of Nikumaroro, a tiny atoll that is part of the Phoenix Islands in the South Pacific. According to this theory, Earhart likely survived the crash and lived for some time on the uninhabited island.

Related: Photos: The Incredible Life and Times of Amelia Earhart

Ballard first became interested in Nikumaroro after seeing a photo known as the Bevington image, taken on the island by a British officer in 1940. When enhanced, the photo revealed an object similar to  landing gear from the Electra, according to the Times.

In August, Ballard and his team set off on their research vessel the "Nautilus," to explore in and around Nikumaroro. The trip was funded by National Geographic Partners and the National Geographic Society, which is releasing a documentary about Earhart, including footage from the expedition on Sunday (Oct. 20).

The team mapped the island with sonar and a floating surface vehicle — and they employed remotely operated vehicles to explore the deeper crevices of the underwater mountain that Nikumaroro is a part of. The team even searched 4 nautical miles out and came up with nothing remotely linked to Earhart. They did, however, find a bunch of rocks that were the same size and shape as the supposed landing gear from the photo, according to the Times.

It "doesn't surprise me at all that they didn't find anything," said Richard Gillespie, the founder of TIGHAR. The Electra was a delicate airplane that was most likely destroyed and "reduced to pieces of aluminum," by the surf following the crash, he said. "It's been 82 years and those small pieces have been scattered and grown over [or] possibly buried in underwater landslides."

That doesn't change all the evidence that "this is where it happened, this is where Earhart ended up," Gillespie said. For one thing, Earhart gave off distress calls around these islands, according to a 2018 report from TIGHAR that wasn't peer-reviewed. Gillespie adds that he wants to review Ballard's data because "it's entirely possible that he found more than he thought he found," he told Live Science. "Things can look like nothing and turn out to be something important."

There are several inconclusive clues that point to this island as the place where Earhart and Noonan crashed, "most notably bones," said Richard Jantz, a professor emeritus in the department of anthropology at the University of Tennessee, who was not a part of the new expedition. In 1940, some bones were found on the island and analyzed by a medical examiner at the time, who claimed they belonged to a male.

The bones have since been lost, but TIGHAR found the doctor's analysis of the bones. Jantz analyzed that lost report in a study published last year in the journal Forensic Anthropology and concluded that Earhart's bones were very similar to those found on Nikumaroro —  more similar than 99% of a reference sample.

Last year, a set of human bones matching the dimensions of the lost bones were found in a museum on the island of Tarawa and a group of researchers at the University of South Florida are planning to conduct DNA testing on them to see if they could have belonged to Earhart, according to CNN.

"Nikumaroro is currently the only hypothesis that has tangible evidence to support it," Jantz said. But a proper scientific hypothesis can be proven wrong — and one way to do that is to find more convincing evidence that she vanished elsewhere, he said.

Whether or not Ballard and his team return to Nikumaroro will depend on whether National Geographic archeologists who are now conducting DNA analysis on soil samples they found on a temporary camp site on the island, find any clues that Earhart was there, according to the Times.

But the team remains hopeful they will eventually find the plane — and might explore an alternate theory that she crashed closer to Howland Island, which was Earhart's next planned refueling spot before she disappeared, according to the Times.

"I was sorry to see Ballard come up empty-handed," said Leo Murphy, a professor of aeronautical science at the Daytona College of Aviation at Embry-Riddle Aeronautical University in Florida, who was also not part of the expedition. "That was unexpected with his previous successes."

But he's hopeful that at least some part of her plane survived for explorers to find. "The key to any search are those big Pratt & Whitney engines," he said. "Earhart's airplane may have slowly disintegrated over decades in salt water, but those engines aren't going anywhere."