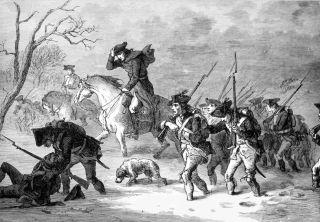 Archaeologists have discovered what may be the remains of soldiers who fought in the Revolutionary War. But it's a mystery whose side they were on; they could have been Yankees, British or even colonists who sided with the king, known as Loyalists.

Archaeologists are now planning to spend months, if not years, studying the skeletal remains to learn more about these three individuals, including, if possible, where their loyalties lay.

"I can't be 100% [certain] yet. I don't have that smoking gun" about whether these individuals were revolutionary soldiers, Nicholas Bellantoni, the interim emeritus Connecticut state archaeologist, told Live Science. "There's more work to be done."

The skeletons were found when the owners of a 1790 home in Ridgefield, Connecticut, decided to put in a concrete floor over their dirt basement in December 2019. The basement was an addition to the house, which means that these individuals were buried there and later the house was expanded, covering the graves.

The house itself is located near the site of the 1777 Battle of Ridgefield, in which British troops on their way to fight George Washington's army farther south in the Hudson Valley came across 700 patriot fighters in Ridgefield, according to the Keeler Tavern Museum, in Ridgefield.

The Americans put up a barricade across one of the town's main streets, and the American militia, led by Gens. Benedict Arnold and Benjamin Silliman, held back the British, according to the Keeler Tavern Museum.

Although 4,435 Americans died in the Revolutionary War, according to the U.S. Department of Veterans Affairs, it's extremely rare to find the human remains of soldiers who fought in that conflict, said Bellantoni, who has nearly 30 years experience working as an archaeologist in Connecticut.

"As far as I know, certainly in New England, this is the first archaeologically excavated remains from the Revolutionary War," he said.

It's possible that more than three skeletons are buried at the site, Bellantoni said. A team of archaeologists plans to use ground-penetrating radar to determine if there are more remains in the area.

Both the Americans and the British buried their dead in Ridgefield after the battle, Bellantoni said. The three individuals recovered so far were buried in the same shallow grave about 4 feet (1.2 meters) under what was ground level at that time, another clue that they likely died in the battle and were hastily buried afterward, Bellantoni said.

Archaeologists also found several brass and pewter buttons alongside the skeletons. Further analysis may reveal if these buttons have any insignia that would identify these men as soldiers. The buttons "are very corroded and rusted, so right now we cannot tell until we get them cleaned up, X-rayed and so forth," Bellantoni said.

However, other signs suggest that the men weren't soldiers. A preliminary examination has failed to find any signs of trauma, "but that may come when we do the forensic work on the skeletons in the lab," Bellantoni said. Researchers are still studying CT (computed tomography) scans of the bones that were made at Quinnipiac University in Connecticut, Bellantoni said.

Experts from across the country, including the University of Connecticut, Quinnipiac University, Yale University, the University of Florida and the University of California, Santa Cruz, are planning to study the remains. The bones and teeth can yield all kinds of information, including whether these individuals had any infections or whether they had enough nutrition as children, said Jaime Ullinger, an associate professor of anthropology and co-director of the Bioanthropology Research Institute at Quinnipiac. Chemical analyses could help scientists figure out where these individuals were born and lived, said Ullinger, who is involved in the skeletal examinations.