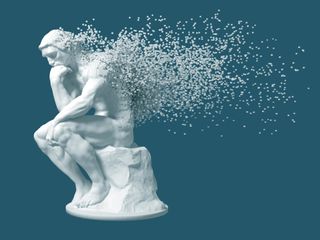 The same fundamental platform that allows Schrödinger's cat to be both alive and dead, and also means two particles can "speak to each other" even across a galaxy's distance, could help to explain perhaps the most mysterious phenomena: human behavior.

Quantum physics and human psychology may seem completely unrelated, but some scientists think the two fields overlap in interesting ways. Both disciplines attempt to predict how unruly systems might behave in the future. The difference is that one field aims to understand the fundamental nature of physical particles, while the other attempts to explain human nature — along with its inherent fallacies.

"Cognitive scientists found that there are many 'irrational' human behaviors," Xiaochu Zhang, a biophysicist and neuroscientist at the University of Science and Technology of China in Hefei, told Live Science in an email. Classical theories of decision-making attempt to predict what choice a person will make given certain parameters, but fallible humans don't always behave as expected. Recent research suggests that these lapses in logic "can be well explained by quantum probability theory," Zhang said.

Zhang stands among the proponents of so-called quantum cognition. In a new study published Jan. 20 in the journal Nature Human Behavior, he and his colleagues investigated how concepts borrowed from quantum mechanics can help psychologists better predict human decision-making. While recording what decisions people made on a well-known psychology task, the team also monitored the participants' brain activity. The scans highlighted specific brain regions that may be involved in quantum-like thought processes.

The study is "the first to support the idea of quantum cognition at the neural level," Zhang said.

Cool — now what does that really mean?

Quantum mechanics describes the behavior of the tiny particles that make up all matter in the universe, namely atoms and their subatomic components. One central tenet of the theory suggests a great deal of uncertainty in this world of the very small, something not seen at larger scales. For instance, in the big world, one can know where a train is on its route and how fast it's traveling, and given this data, one could predict when that train should arrive at the next station.

Now, swap out the train for an electron, and your predictive power disappears — you can't know the exact location and momentum of a given electron, but you could calculate the probability that the particle may appear in a certain spot, traveling at a particular rate. In this way, you could gain a hazy idea of what the electron might be up to.

Just as uncertainty pervades the subatomic world, it also seeps into our decision-making process, whether we're debating which new series to binge-watch or casting our vote in a presidential election. Here's where quantum mechanics comes in. Unlike classical theories of decision-making, the quantum world makes room for a certain degree of … uncertainty.

Related: The Funniest Theories in Physics

Classical psychology theories rest on the idea that people make decisions in order to maximize "rewards" and minimize "punishments" — in other words, to ensure their actions result in more positive outcomes than negative consequences. This logic, known as "reinforcement learning," falls in line with Pavlonian conditioning, wherein people learn to predict the consequences of their actions based on past experiences, according to a 2009 report in the Journal of Mathematical Psychology.

If truly constrained by this framework, humans would consistently weigh the objective values of two options before choosing between them. But in reality, people don't always work that way; their subjective feelings about a situation undermine their ability to make objective decisions.

Heads and tails (at the same time)

Imagine you're placing bets on whether a tossed coin will land on heads or tails. Heads gets you $200, tails costs you $100, and you can choose to toss the coin twice. When placed in this scenario, most people choose to take the bet twice regardless of whether the initial throw results in a win or a loss, according to a study published in 1992 in the journal Cognitive Psychology. Presumably, winners bet a second time because they stand to gain money no matter what, while losers bet in attempt to recover their losses, and then some. However, if players aren't allowed to know the result of the first coin flip, they rarely make the second gamble.

When known, the first flip does not sway the choice that follows, but when unknown, it makes all the difference. This paradox does not fit within the framework of classical reinforcement learning, which predicts that the objective choice should always be the same. In contrast, quantum mechanics takes uncertainty into account and actually predicts this odd outcome.

"One could say that the 'quantum-based' model of decision-making refers essentially to the use of quantum probability in the area of cognition," Emmanuel Haven and Andrei Khrennikov, co-authors of the textbook "Quantum Social Science" (Cambridge University Press, 2013), told Live Science in an email.

Just as a particular electron might be here or there at a given moment, quantum mechanics assumes that the first coin toss resulted in both a win and a loss, simultaneously. (In other words, in the famous thought experiment, Schrödinger's cat is both alive and dead.) While caught in this ambiguous state, known as "superposition," an individual's final choice is unknown and unpredictable. Quantum mechanics also acknowledges that people's beliefs about the outcome of a given decision — whether it will be good or bad — often reflect what their final choice ends up being. In this way, people's beliefs interact, or become "entangled," with their eventual action.

Subatomic particles can likewise become entangled and influence each other's behavior even when separated by great distances. For instance, measuring the behavior of a particle located in Japan would alter the behavior of its entangled partner in the United States. In psychology, a similar analogy can be drawn between beliefs and behaviors. "It is precisely this interaction," or state of entanglement, "which influences the measurement outcome," Haven and Khrennikov said. The measurement outcome, in this case, refers to the final choice an individual makes. "This can be precisely formulated with the aid of quantum probability."

Scientists can mathematically model this entangled state of superposition — in which two particles affect each other even if they’re separated by a large distance — as demonstrated in a 2007 report published by the Association for the Advancement of Artificial Intelligence. And remarkably, the final formula accurately predicts the paradoxical outcome of the coin toss paradigm. "The lapse in logic can be better explained by using the quantum-based approach," Haven and Khrennikov noted.

In their new study, Zhang and his colleagues pitted two quantum-based models of decision-making against 12 classical psychology models to see which best predicted human behavior during a psychological task. The experiment, known as the Iowa Gambling Task, is designed to evaluate people's ability to learn from mistakes and adjust their decision-making strategy over time.

In the task, participants draw from four decks of cards. Each card either earns the player money or costs them money, and the object of the game is to earn as much money as possible. The catch lies in how each deck of cards is stacked. Drawing from one deck may earn a player large sums of money in the short term, but it will cost them far more cash by the end of the game. Other decks deliver smaller sums of money in the short-term, but fewer penalties overall. Through game play, winners learn to mostly draw from the "slow and steady" decks, while losers draw from the decks that earn them quick cash and steep penalties.

Historically, those with drug addictions or brain damage perform worse on the Iowa Gambling Task than healthy participants, which suggests that their condition somehow impairs decision-making abilities, as highlighted in a study published in 2014 in the journal Applied Neuropsychology: Child. This pattern held true in Zhang's experiment, which included about 60 healthy participants and 40 who were addicted to nicotine.

The two quantum models made similar predictions to the most accurate among the classical models, the authors noted. "Although the [quantum] models did not overwhelmingly outperform the [classical] ... one should be aware that the [quantum reinforcement learning] framework is still in its infancy and undoubtedly deserves additional studies," they added.

Related: 10 Things You Didn't Know About the Brain.

To bolster the value of their study, the team took brain scans of each participant as they completed the Iowa Gambling Task. In doing so, the authors attempted to peek at what was happening inside the brain as participants learned and adjusted their game-play strategy over time. Outputs generated by the quantum model predicted how this learning process would unfold, and thus, the authors theorized that hotspots of brain activity might somehow correlate with the models' predictions.

The scans did reveal a number of active brain areas in the healthy participants during game play, including activation of several large folds within the frontal lobe known to be involved in decision-making. In the smoking group, however, no hotspots of brain activity seemed tied to predictions made by the quantum model. As the model reflects participants' ability to learn from mistakes, the results may illustrate decision-making impairments in the smoking group, the authors noted.

However, "further research is warranted" to determine what these brain activity differences truly reflect in smokers and non-smokers, they added. "The coupling of the quantum-like models with neurophysiological processes in the brain ... is a very complex problem," Haven and Khrennikov said. "This study is of great importance as the first step towards its solution."

In time, perhaps quantum mechanics will help explain pervasive flaws in human logic, as well as how that fallibility manifests at the level of individual neurons.