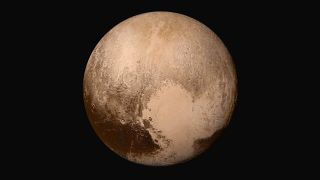 Most of the action comes courtesy of the heart's left lobe, a 600-mile-wide (1,000 kilometers) nitrogen-ice plain called Sputnik Planitia. This exotic ice vaporizes during the day and condenses into ice again at night, causing nitrogen winds to blow, the researchers determined. (Pluto's atmosphere is dominated by nitrogen, like Earth's, though the dwarf planet's air is about 100,000 times thinner than the stuff we breathe.)

These winds carry heat, particles of haze and grains of ice westward, staining the ices there with dark streaks.

"This highlights the fact that Pluto's atmosphere and winds — even if the density of the atmosphere is very low — can impact the surface," study lead author Tanguy Bertrand, an astrophysicist and planetary scientist at NASA's Ames Research Center in California, said in a statement.

And that westward direction is interesting in itself, considering that Pluto spins eastward on its axis. The dwarf planet's atmosphere therefore exhibits an odd "retrorotation," study team members said.

This work revealed the likely presence of westerly winds — a high-altitude variety that races along at least 2.5 miles (4 kilometers) above the surface and a fast-moving type closer to the ground that follows Sputnik Planitia's western edge.

That edge is bounded by high cliffs, which appear to trap the near-surface winds inside the Sputnik Planitia basin for a spell before they can escape to the west, the new study suggested.

"It's very much the kind of thing that's due to the topography or specifics of the setting," planetary scientist Candice Hansen-Koharcheck, of the Planetary Science Institute in Tucson, Arizona, said in the same statement.

"I'm impressed that Pluto's models have advanced to the point that you can talk about regional weather," added Hansen-Koharcheck, who was not involved in the new study.

New Horizons' Pluto flyby revealed that the dwarf planet is far more complex and diverse than anyone had thought, featuring towering water-ice mountains and weird "bladed" terrain in addition to the photogenic heart (whose official name, Tombaugh Regio, honors the discoverer of Pluto, Clyde Tombaugh).

The new study, which was published online Tuesday (Feb. 4) in the Journal of Geophysical Research: Planets, reinforces and extends that basic message.