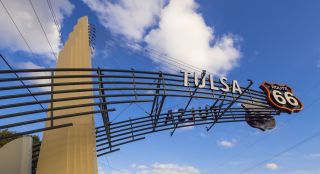 A sign for historic Route 66 near Tulsa.
(Image: © Shutterstock)

On Thursday (March 27), the state received 10,000 COVID-19 testing kits, relieving a critical shortage of testing supplies. Last week, Governor Kevin Stitt said that the state was down to about 100 effective tests, forcing health care workers to reserve tests for only high-risk individuals, The Oklahoman reported.

On Tuesday (March 24), governor Stitt ordered all nonessential businesses in all Oklahoma counties with confirmed cases of COVID-19 to close for 21 days, beginning Wednesday (March 25) at midnight. The order will include additional counties as new COVID-19 cases are confirmed, The Oklahoman reported.

Stitt also enacted a "safer-at-home" policy to mandate the state's vulnerable populations (including elderly citizens as well as citizens with autoimmune disorders) to remain at home except for essential travel to the grocery store or pharmacy. Stitt is asking those citizens to self-isolate until April 30.

In response to the growing number of US coronavirus cases, the governor also banned all gatherings of more than 10 people across the state.

The State Board of Education has voted to close all schools statewide from March 17 until at least April 6.

On Sunday (March 15) governor Stitt declared a state of emergency in all 77 counties. The executive order encourages state agencies to establish work-from-home policies for employees.

Two members of the Utah Jazz NBA team — Donovan Mitchell and Rudy Gobert — tested positive for the disease while in Oklahoma City for a game against the Oklahoma City Thunder. The NBA has since suspended the rest of the season, and told all teams who have played the Utah Jazz since March 2 to self-quarantine (this includes the Cleveland Cavaliers, New York Knicks, Boston Celtics, Detroit Pistons and Toronto Raptors, CBS Sports reported).