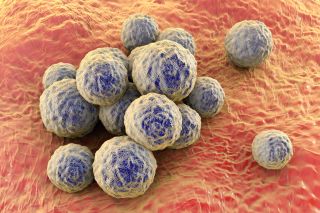 The bacteria methicillin-resistant Staphylococcus aureus MRSA can be seen on the surface of a mucous membrane in this 3D illustration.
(Image: © Shutterstock)

Antibiotic resistance is spreading fast all over the world. When infectious bacteria mutate in a certain way and then multiply, they can become resistant to even the most powerful drugs. But research has revealed a worrying alternative way that antibiotic resistance can spread: an organism that passes on its resistance on to other living bacteria.

In June 2012, a 35-year old man from São Paulo found himself in the hospital with a myriad of problems. Alongside a diagnosis of skin cancer, he was told he harbored a potentially lethal bacterial infection. The doctors placed him on a course of chemotherapy and antibiotics, and the bacteria-killing treatment appeared to do its work. But within a month the microbe-driven fever had returned.

The patient had contracted the well-known superbug MRSA (methicillin-resistant Staphylococcus aureus). So the medical team turned to one of the "last line of defence" antibiotics, the powerful compound vancomycin. This strain of MRSA originally had no natural defence against vancomycin, but by August that year it had become resistant, rendering the treatment ineffective.

Scientists would later uncover that rather than acquiring resistance through a simple mutation, the MRSA had instead been gifted a huge chunk of new DNA. Within this string of donated genetic code were the instructions for proteins that would keep the bacteria safe from the destructive work of the antibiotic. MRSA had been dealt a winning hand, but where had this DNA come from?

Enter Enterococcus faecalis. This bug is typically described as a commensal bacterium (one of our "good bacteria"), which lives happily in our guts causing no harm. Our digestive tracts are a hive of microbial activity, hosting single-celled organisms in their trillions. The so-named microbiome is incredibly important for maintaining a healthy human gut, but also helps to suppress the sinister side of bugs like faecalis.

When patients with weakened immune systems undergo antibiotic treatments, this undesirable side can flourish. When we are given antibiotics, they indiscriminately sweep away all bacteria that have no natural defences, sometimes clearing the gut microbiome of many of its friendly inhabitants. But faecalis is intrinsically equipped with an arsenal of natural resistance mechanisms within its DNA, often allowing it to survive.

With no oppressive neighbors around or an able immune system to keep them in check, faecalis and its resistant peers proliferate and thrive, dividing happily to move into the newly available real estate of the gut. And before long they come into close contact with their resistant and potentially disease-causing neighbors.

When humans come together we often exchange ideas through language. But when bacteria come together they can exchange information through DNA-encoded instructions. This is known as horizontal gene transfer, where copies of DNA move from one cell to another. Unfortunately, E. faecalis and its superbug compatriots have all the best information to share, information that allows them to survive antibiotics.

But faecalis has gone one step further on its evolutionary journey, becoming one of the ultimate dealers of antibiotic resistance. One defence mechanism used by bacteria to guard themselves against unwanted genetic code is the CRISPR-cas9 system, which scientists are also now using as a way to edit DNA. The system originated as a means for bacteria to chop viral DNA and other potentially dangerous genetic code to pieces before it caused them harm.

E. faecalis once harbored the important CRISPR-cas9 system but, amazingly, sacrificed the defence mechanism so that all manner of DNA could enter and remain within the walls of the cell. This was a risky strategy but ultimately proved worthwhile, unlocking the means for faecalis to acquire, and subsequently pass on, swathes of genetic knowledge. It was through this gain-and-exchange design that faecalis bestowed vancomycin resistance upon MRSA.

Antibiotics perform a critical role in modern medicine. They're used routinely to treat infectious disease, administered pre-emptively after surgery, and have contributed to raising the average life expectancy by an average of 20 years across the globe. This makes tackling antibiotic resistance one of the most pressing issues faced by our species today. Yet, in bacteria such as faecalis, scientists have discovered microbes colluding to escalate the danger presented by evolved antibiotic resistance.

This makes understanding E. faecalis of paramount importance. Yet much of the microbe's natural, intrinsic resistance remains shrouded in mystery. Frustratingly, faecalis often has an ace up its sleeve when challenged by antibiotics. If we delete an integral piece of DNA, for example, we often find that faecalis has another section of DNA that can perform the same role, providing antibiotic resistance regardless. However, we don't yet fully understand which pieces of DNA have genetic back-up plans and which do not.

A piece of DNA without any backups would make for an ideal drug target. And fortunately, we're able to identify these vital pieces in the lab by incrementally deleting segments of DNA. One by one, each deletion will bring us a step closer to identifying key portions of genetic code that are critical for E. faecalis to survive. This makes us confident that we'll soon be able to stack the deck in our favor against this thrifty opportunistic pathogen, and eventually remove the dealer from the game.