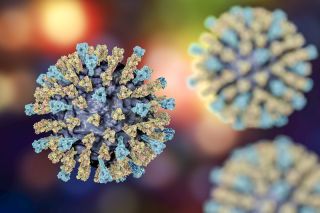 The notorious measles virus not only makes people sick, it also sneaks inside important immune cells in the body and wipes their "memories," new research suggests.

Once infected, the amnesic immune system no longer recognizes the harmful pathogens that it has fought off in the past. This means measles survivors can remain susceptible to dangerous diseases — such as the flu and pneumonia — for years to come, despite having weathered their initial illness.

"Measles essentially takes away their ability to efficiently protect themselves," said Michael Mina, an epidemiologist at Harvard University and co-author of the new study, published today (Oct. 31) in the journal Science. The paper pairs with another published today in Science Immunology. Using data from a group of unvaccinated children in the Netherlands, both studies revealed what scientists have long suspected: that the measles virus cripples the immune system in a profound and lasting way.

"What this has done is document exactly how that immunosuppression takes place, and gives us a sense of how broad that immunosuppression can be," said Dr. William Schaffner, a professor of preventive medicine and infectious disease at Vanderbilt University who was not involved in the work. The findings also serve as a reminder that this year's record-breaking measles outbreaks in the U.S. will have lingering effects, Schaffner added.

"Those children are now living through a period of post-measles life more susceptible to other infections," he said. Worldwide, the number of measles cases has increased by more than 280% since 2018, according to the World Health Organization — that means hundreds of thousands of people who caught the virus this year may now bear the brunt of secondary infections as well.

Scientists have long theorized that the measles virus may cause "immune amnesia," but they never knew exactly how. They know that, once the virus infects a person, it depletes the body's supply of pathogen-purging white blood cells. The cell count rebounds to normal levels once the infection clears, but even then, the affected person may remain immunosuppressed for years afterward — basically, the measles virus transforms people into sitting ducks for other infectious diseases.

"Yet, it paradoxically leaves robust anti-measles immunity in its wake," Dr. Duane Wesemann, a professor of medicine at Brigham and Women's Hospital who was not involved in the work, wrote in a commentary accompanying the study in Science Immunology. In other words, while measles survivors struggle to defend themselves against other pathogens, their bodies can fend off a repeat attack by the measles virus itself.

In fact, before the measles vaccine was introduced in the 1960s, an estimated 50% of childhood deaths may have been associated with infections that kids caught after surviving a bout of measles, according to a 2015 study published in Science. How does measles wreak such havoc on the immune system, even after the infection clears?

The authors of the Science Immunology study examined the children's white blood cells, namely, a type of white blood cell called a B-cell. When the body picks up a new pathogen, B-cells build proteins that grab hold of the germ and hand it to another protein for destruction. B-cells keep building these antibodies even after the pathogen clears, so the body "remembers" the disease if it ever returns.

Forty to fifty days after infection, when the virus had cleared, the affected children assembled a new army of B-cells to replace those lost during the illness. However, it's unclear how effective the new "soldiers" are at fighting off specific infections — that may be a question for future studies, Wesemann said.

Related: 6 Superbugs to Watch Out For

Rather than taking stock of B-cells, authors of the Science study went straight to the front lines of immune defense: the antibodies themselves. Trillions of antibodies can be found in every 0.00003 ounces (1 microliter) of blood, Mina said. Many of these antibodies are produced by bone marrow cells called long-lived plasma cells, which also perish at the hands of the measles virus.

But the measles virus erased much of that history.

After catching the virus, children lost between 11% and 72% of their total antibody diversity, indicating that measles had partially wiped their immune memory. In general, the number of antibodies lost appeared to depend on the severity of the measles infection. Vaccinated children, as well as unvaccinated people who didn't get measles, retained about 90% of their antibody repertoire over the same period.

The study "quite convincingly showed that this immune damage is likely due...to the actual antibodies disappearing," Wesemann told Live Science.

Moral of the story: Vaccinate

Measles survivors can recover from immune amnesia, but only by reacquainting themselves with all their previous pathogens. During the Science study, some children quickly regained new antibodies to fight off staph infections, influenza and adenoviruses, the family of viruses that cause sore throats and pneumonia. The researchers found that all these kids either lived together or in the same neighborhoods, which expedited the pathogens' spread.

"What we were actually witnessing was [the] reeducation" of their immune system, Mina said. Although the relatively healthy Dutch children withstood these secondary infections, malnourished or immunocompromised children might not fare so well after measles, he added. "Getting bombarded by many infections at once could be particularly devastating."

Wesemann wondered if antibody-replacement therapy, in which people receive antibodies from donors, might help sustain children after measles infection, while they build up their defenses once more. Questions also remain about why some kids lose more antibodies to measles than others, and how shifts in white-cell diversity affect survivors in the long term, he said.

"One thing that is clear here is that the measles vaccine is a fantastic thing," Wesemann said. The vaccine equips the body with an arsenal of anti-measles antibodies, just as the virus itself would, he said. But unlike infection, inoculation does not blunt the body's ability to build antibodies against other pathogens — the Science study shows this incredible feat in action. "You get all of the good and none of the bad with the vaccine," Wesemann said.

In light of the recent measles outbreaks in the U.S., Schaffner said that research like this highlights the integral role of the measles vaccine to public health.

"Measles should not be underestimated," Schaffner said. "It is clearly a disease worth preventing."