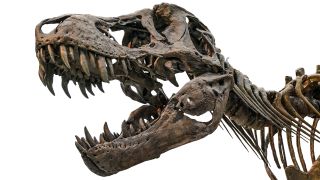 In this episode of Life's Little Mysteries, we'll take a closer look at a mysterious group of animals that included some of the heaviest, tallest and fiercest creatures to ever walk the planet — dinosaurs.

Are modern birds really living dinosaurs? What were the biggest and the smallest dinosaurs that ever lived? And could it be possible to clone a dinosaur? Listen to Life's Little Mysteries 8: Mysterious Dinosaurs, to find out!

We'll also hear about why a newly-discovered T. rex cousin was given the terrifying name "the reaper of death," and how paleontologists learned that what they thought were two pygmy tyrannosaurs turned out to be a pair of T. rex teenagers.

Guests: Holly Woodward, a paleontologist and an associate professor of anatomy with the Center for Health Sciences at Ohio State University; Laura Geggel, associate editor at Live Science.

Listen to Life's Little Mysteries 8: Mysterious Dinosaurs below, or subscribe on Apple Podcasts, Spotify or Audioboom, so you don’t miss out on new episodes.