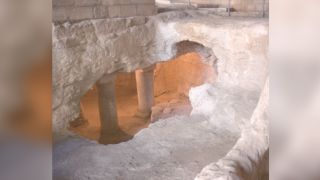 Archaeologists examined these rock-cut features under the Church of the Annunciation in Nazareth.
(Image: Â© Ken Dark)

The town of Nazareth in modern-day Israel is steeped in mystique, as it is thought to be the place where Jesus was raised. And now, a new study has uncovered more of its secrets, finding that the people of Nazareth rejected Roman culture and even revolted against the Roman Empire around A.D. 70.Â

The researcher of the study also found that Nazareth was likely larger than thought during the time of Jesus. The findings might help to explain some stories of Jesus described in the bible.Â

Nazareth's opposition to Roman cultural practices and objects would have stood in stark contrast to its neighbor, a city called Sepphoris, which embraced Roman culture, including imported objects. "Cultural separation may have created what was, in effect, an invisible barrier between Nazareth and Sepphoris," wrote study author Ken Dark, director of the Nazareth Archaeological Project, in his recently published book "Roman-Period and Byzantine Nazareth and Its Hinterland" (Routledge, 2020).

Related: See Images of the 'Jesus' House and Nazareth Artifacts

Dark also found that people in Nazareth may have resisted the Romans during a revolt around A.D. 70, digging refuge caves to protect themselves from Roman soldiers. This contrasts with Sepphoris where coins minted at the time of the revolt say that it was a "city of peace" where inhabitants did not revolt. The study also found that people within or near Sepphoris were willing to use imported Roman pottery styles while people within or near Nazareth stuck to local styles and were particularly fond of vessels made of limestone, a material considered pure under Jewish religious laws of the time.Â

Another contrast, Dark noted, is that farmers near Sepphoris used human waste as manure despite this practice being forbidden under some interpretations of ancient Jewish religious law; meanwhile, farmers near Nazareth avoided this practice.Â

People buried in Nazareth also seem to have preferred what archaeologists call "kokhim" tombs, which are cut into rock and have an entrance closed off with a rolling stone — a type of tomb that is similar to the one where Jesus was buried in the New Testament. This tomb design is seen in other parts of Israel and those buried in the tombs may "have wanted to express a strongly Jewish identity," Dark wrote in his book.Â

Dark has been conducting surveys and excavations in Nazareth for many years and, in preparing his study, also reviewed previous archaeological work at Nazareth by other archaeologists.Â

Dark emphasized that his study is not meant to shed light on the bible, but the results may help to explain some stories of Jesus that are told in the Bible.Â

For instance, biblical stories say that, despite growing up in Nazareth, Jesus was poorly received when he visited his hometown during his ministry. Even some of his own family members were not happy with him. According to the Gospel of Mark, Jesus said that "a prophet is not without honor except in his own town, among his relatives and in his own home" (Mark 6:4).Â

The archaeology of Nazareth, which shows that people in the area strongly rejected Roman objects, values and practices regarded as impure, may have contrasted with some of Jesus' teachings, Dark told Live Science. "The all-encompassing message of salvation being presented by Jesus might also have been controversial to local people who may have sought to create a cultural barrier between themselves and the Romans."Â

Also "comparing the teachings of Jesus about religious purity with what seems from archaeological evidence to have been the local cultural attitudes of people in Nazareth, suggests that local people in Nazareth would also have found those teachings in contrast with their own perceptions of what was pure and impure," Dark said.Â

In the biblical stories, Jesus expresses a lenient view of ritual purity, at least in regard for food, saying that "there is nothing outside a person that by going in can defile, but the things that come out are what defile" (Mark 7:14). This seems to contrast with Dark's and others' archaeological findings at Nazareth, which suggest that people in the town practiced a strict interpretation of purity.Â

Nazareth may have been bigger than originally believed, based on the structures that have been discovered there. "Excavated evidence from work by numerous archaeologists over more than a century demonstrates the existence of domestic structures, storage facilities and hiding places in central Nazareth dating from the Roman period," Dark wrote in his book.Â

"There is evidence of agriculture, quarrying and rock-cut tombs," Dark wrote. In the past, some scholars thought Nazareth was a very small settlement in Jesus' time, possibly no bigger than a hamlet. The archaeological remains analyzed by Dark suggest that, while Nazareth was not as large as Sepphoris, it was larger than originally believed.Â

Dark's research in Nazareth is ongoing and a book set to be published later this year will present detailed results from a specific site in Nazareth known as the "Sisters of Nazareth" convent.Â