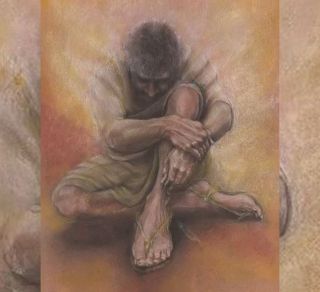 New research by Joan Taylor suggests Jesus may have been an average height, with short black hair, brown eyes and olive-brown skin.
(Image: © Painting by Cathy Fisher, showing shorter clothing and hair for Jesus, in accordance with the new results.)

A quick Google search of "Jesus" will pull up an assortment of images showing a tall, white guy with long, blondish hair and a beard. But what did Jesus really look like?

In her new book, a scholar says Jesus probably didn't look anything like this modern picture.

The Gospels in the Bible say that Jesus was a Jew who was born around 4 B.C. in Bethlehem and lived in Egypt as a child for a short time before moving to Nazareth. These writings make no mention of what Jesus looked like, aside from some references to the clothing that he and his disciples wore, wrote Joan Taylor, professor of Christian Origins and Second Temple Judaism at King's College London, in her book "What Did Jesus Look Like?" (T&T Clark, 2018).

"It's so curious how little is made of it, what he looked like," Taylor told Live Science. [See Images of Jesus' House and Nazareth Artifacts]

Even so, both Moses (the prophet said to have led the Israelites) and David, who the Bible says killed Goliath, were described as being handsome figures in the Hebrew Bible.

Additionally, the earliest artistic depictions of Jesus date to at least two centuries after he died, and they provide little credible information about what Jesus may have looked like, Taylor wrote in her book.

To get an idea of Jesus' visage, Taylor turned to archaeology and texts that provide clues about the general appearance of Jews in Judea and Egypt at the time Jesus lived. She also looked at artistic images on coins and Egyptian mummy paintings.

According to Taylor's research, rather than towering over others in Judea, Jesus was about 5 foot 5 inches (1.7 meters) tall, or the average height seen in skeletal remains from males there at the time. People in Judea and Egypt tended to have brown eyes, black hair and olive-brown skin, based on surviving archaeological remains, historical texts and depictions of people seen in mummy portraits from Egypt, Taylor said in her book.

There was interaction between Judea and people from Europe (who could have lighter skin) as well as Sudan and Ethiopia (who could have darker skin). But because Jews in Judea and Egypt tended to marry among themselves at the time, Jesus' skin, eyes and hair probably looked like those of the majority of the people in Judea and Egypt, Taylor found. Surviving texts say that Jews in Egypt couldn't be physically distinguished from the rest of Egypt's population around Jesus' time. [Proof of Jesus Christ? 7 Pieces of Evidence Debated]

Historical records also showed that people in Judea tended to keep their hair (and beards) reasonably short and well-combed, probably to keep out lice, a big problem at the time, Taylor said. Jesus likely did the same.

He could have used a knife to trim his hair and beard, Taylor said, noting that people in the ancient world tended to be more skilled with knives than people are today.

Jesus is portrayed in the gospels as a carpenter who did a lot of walking but at times didn't have much to eat. This active lifestyle, but lack of regular food, meant that he was probably thin, but somewhat muscular, Taylor said. "Jesus was a man who was physical in terms of the labor that he came from," Taylor said. "He shouldn't be presented as [in] any way someone who was living a soft life, and sometimes that's the kind of image we get."

Some aspects of Jesus' face, such as his mouth and cheeks, are anyone's guess, Taylor said. He may have had facial scars or skin damage from his work as a carpenter, but there's no way to tell, Taylor said.

She said she is skeptical of depictions of Jesus that show him as being very handsome. If Jesus were handsome, Taylor said, the gospel writers, or other early Christian writers, would have said so, as they did for Moses and David.

The gospels, along with surviving archaeological remains, do provide some hints about Jesus' clothing. He likely wore a woolen, undyed tunic that left his lower legs bare; possibly a loincloth; and a "mantle," or outer cloak, to stay warm.

His shoes would have looked like modern-day sandals, and the high price of clothing meant that Jesus likely did a lot of mending. Also, unless someone provided him with fresh clothing, what he wore would become more tattered as time went on. From his clothing, "I think what you would recognize Jesus as being is just really someone who looked very poor," Taylor said.

Among the biblical scholars who have read Taylor's book, Helen Bond, a professor of theology at the University of Edinburgh in Scotland, and Jim West, an adjunct professor of biblical studies at Ming Hua Theological College in Hong Kong, gave the work generally positive reviews.

Taylor said she looks forward to seeing scholars publish detailed reviews of the book. She is also looking forward to seeing more artists try to reconstruct images of Jesus based on her findings, she said. Her book features a reconstruction by artist Cathy Fisher based on Taylor's findings.