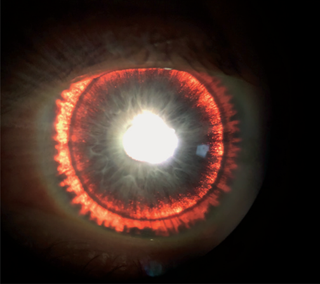 A man's eye exam revealed an eerie "glow" in his iris, which was a sign of a rare disorder that caused his eye pigment to flake off.
(Image: © The New England Journal of Medicine ©2019)

A man's eye exam showed something unusual: His iris appeared to be "glowing."

This eerie appearance turned out to be a sign of a rare disorder that caused his eye pigment to flake off, according to a new report of the case.

The 44-year-old man went to an eye clinic after he moved to a new area and wanted to get set up with an eye doctor there, according to the report, published today (Nov. 13) in The New England Journal of Medicine.

He said that he had a family history of glaucoma, an eye disease that can damage the optic nerve, the bundle of nerve fibers that connects the back of the eye to the brain. This damage is typically caused by increased pressure in the eye, and indeed, the man had already been diagnosed with high eye pressure and was taking medication to reduce it, according to the report authors, from the University of Texas Medical Branch at Galveston.

Still, tests found that the pressure in his eye was very slightly above the normal range.

What's more, when the doctor performed an eye exam, using a microscope and a bright light to view the eye, the evaluation revealed "iris transillumination" in both of the patient's eyes, the report said. In other words, light was shining through the iris, or the colored part of the eye. This happens when sections of pigment are missing from the iris, which allows light to pass through, according to the National Institutes of Health.

The man was diagnosed with pigment dispersion syndrome. In this eye condition, pigment rubs off the back of the iris, according to the American Academy of Ophthalmology (AAO). These flakes of pigment can clog the eye's drainage system, resulting in increased eye pressure, which in turn can lead to glaucoma.

Pigment dispersion syndrome is rare, although it is more commonly diagnosed in men in their 20s and 30s and may be inherited, the AAO says.

In this case, the man underwent laser therapy to open the eyes's clogged drainage channels. This therapy helps fluid flow out of the eye and reduces eye pressure, the AAO says. However, patients often need to continue taking pressure-reducing eye medications after the surgery, as was the case for this patient, the case report said.