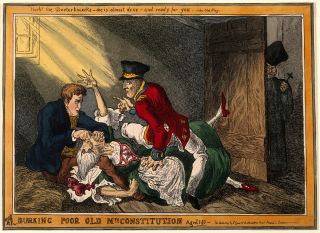 Researchers think the bones were buried in the 1850s, to avoid the penalties of a law restricting the grisly practice of "anatomizing," which culminated in 16 murders by William Burke and William Hare to sell the corpses for anatomical lectures.
(Image: © Wellcome Collection/CC by 4.0)

The grisly discovery of human bones behind a house in the Scottish city of Aberdeen is now thought to point to a dark chapter in history — the illicit use of dead bodies for anatomical practice in the 19th century.

Construction workers digging a trench in the backyard of a 200-year-old house in the oldest part of the city discovered the bones late last year.

The workmen reported their discovery to the police — a requirement of Scottish law, whenever human bones are found — who called in Aberdeenshire's regional archaeologist, Bruce Mann, to determine if the bones belonged to people who had recently died.

"Some of them are very recognizable as being parts of human skulls," Mann told Live Science. After examining the remains, he decided that the bones were over 100 years old.

But that wasn't all — some of the bones showed strange injuries. "You could tell that there were multiple different cut marks. … So something a bit different was going on," he said.

Archaeologists eventually unearthed a total of 115 fragments of human bones from the yard of the house; they turned them over to Aberdeen University, where they were studied by osteoarchaeologist Rebecca Crozier.

When Crozier pieced together the bone fragments and determined their age by radiocarbon dating, she discovered that they came from seven different individuals who probably lived between 1750 and 1850 — and that two of the individuals were children.

Her examinations revealed that the marks on the bones were the scars of medical procedures — including a craniotomy, which involves opening the skull — that had been carried out on the human bodies post-mortem.

That suggests the bodies were recovered after death and used for medical training by students at Aberdeen University — renowned as having one of the best medical schools in Britain at that time.

It is now thought that the medical students secretly buried all seven bodies in the yard in the 1850s, to avoid legal penalties for using dead bodies for dissection and for practicing surgery, Crozier told Live Science

"We cannot say for sure how they acquired them," she said, "but given the history at the time, it certainly doesn't look good."

A law called the Anatomy Act, passed in 1832, heavily restricted the use of dead bodies for dissection or to practice surgery in medical schools, Mann explained.

The law was passed amid public outrage over the sale of dead bodies for medical training, an often lucrative trade that sometimes led to grave robbing.

At its height, the gruesome practice of "anatomizing" corpses led to the infamous exploits of William Burke and William Hare, who carried out 16 murders to sell the corpses for anatomy lectures in Edinburgh.

Related: In Photos: The Oddities of Human Anatomy

His research has even revealed a suspect — one Alexander Creyk, a medical student who was recorded as a lodger at the house in the census of 1851.

In addition to using the bodies for his own medical practice, Creyk might have shared the dead bodies with other medical students lodging at the house, which is relatively close to the medical school of Aberdeen University, Mann said.

But although the evidence points to nefarious activities by Creyk, Mann still can't be sure: "This is very much circumstantial evidence against this poor individual," he said. "He may be perfectly innocent, and he just happens to be the medical lodger that happened to be there at the time."

Now that they've been recorded and analyzed, the bones will be reburied at a cemetery in Aberdeen, Mann said.