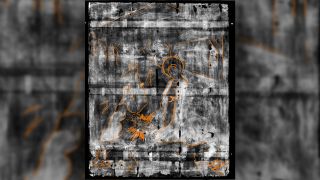 X-rays of a medieval painting revealed a Nativity scene that was painted over centuries ago.
(Image: © Northumbria University and The Bowes Museum)

Just in time for Christmas, a long-hidden Nativity scene has surfaced after laying concealed for centuries under another painting.

On its surface, the artwork shows the beheading of St. John the Baptist, and it is thought to be around 400 years old, representatives of Northumbria University in Newcastle, U.K., said in a statement.

However during the work's restoration, X-rays of the painting hinted that a very different story lurked in the layers of paint underneath the surface. In the X-rays, restorers spotted shapes that resembled those typically found in Nativity scenes, such as a baby with a halo around its head, kneeling angels and a manger's walls rising in the background, according to the statement.

The painting is in the collection of The Bowes Museum in northeastern England; its canvas, stretched over a large wooden panel made from several pieces of wood, was likely a section of a larger altar piece. Over the centuries, the painting had fallen into disrepair. Experts from Northumbria's fine-art-conservation program X-rayed the artwork to measure the deterioration of the paint, which was badly damaged where the panel's wooden pieces joined together.

"That was when we realised there was more to the painting than we originally thought," art conservator Nicky Grimaldi, a senior lecturer in Northumbria's Arts Department, said in the statement.

In the X-rays, ghostly white figures appeared, including one that seemed to be holding its arms out to offer a gift, as the three wise men, or Magi, often do in Nativity scenes. The outline of a baby with a gold-rimmed halo also emerged, Grimaldi said in the statement.

"Incredibly, we can see lines over the X-ray image which we believe to be preparatory drawings, showing where the painting was probably copied from an original drawing," she explained. "Those lines were subsequently filled with another paint layer, such as lead white, which allows them to be visible on the X-ray."

Earlier this year, details of similarly hidden images were revealed in another painting: Leonardo da Vinci's "The Virgin of the Rocks," which depicts the Virgin Mary, the baby Jesus and an attending angel. But in that case, the concealed image was an earlier version of the same scene, only with the characters in different positions.

"It really is quite unusual to find paintings hidden in this way," Grimaldi said in the statement. "And to discover a Nativity scene in this detail — and just before Christmas — was really incredible."