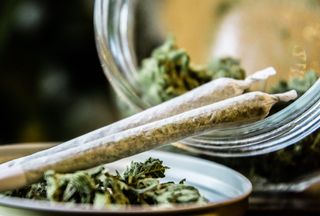 Young people who use marijuana frequently are more than twice as likely to have a stroke compared to those who don't use the drug at all, according to a new study.

The findings, which will be presented next week at the annual American Heart Association (AHA) Scientific Sessions meeting in Philadelphia, add to a growing body of research linking marijuana use to an increased risk of cardiovascular problems. The new study, which will also be published in an upcoming issue of the journal Stroke, is one of the first to specifically focus on the risk of stroke in young cannabis users (under age 45).

The researchers analyzed results from a national survey, called the Behavioral Risk Factor Surveillance System, which had published data on marijuana use and stroke incidence.

The authors compared the frequency of marijuana use to the incidence of stroke in people ages 18 to 44 years old. Among the 43,860 participants, 13.6% had used marijauna in the last 30 days. (The data doesn't specify the way in which participants used marijuana, though a majority of the survey respondents said they smoked it). Marijuana users tended to also report heavy drinking and use of tobacco cigarettes.

For those who used marijuana frequently and also smoked cigarettes or e-cigarettes, the risk was even greater. These individuals were nearly three times more likely to have a stroke, compared with those who didn't use either marijuana or cigarettes.

But these findings show only an association and cannot prove that marijuana use causes strokes. The authors noted that other substances, such as alcohol, may also influence the risk of stroke seen in the study, even though the scientists attempted to adjust for additional substance use in their analysis.

What's more, even if there is a cause-and-effect relationship between marijuana use and stroke, researchers don't exactly know how the drug might be leading to stroke. Marijuana use has been linked to an increased number of blood clots, which might, in turn, increase the risk of stroke, according to a previous Live Science report.

Cannabis might also trigger "reversible cerebral vasoconstriction," or a temporary narrowing of the blood vessels in the brain that has been linked with stroke, said lead author Dr. Tarang Parekh, a health policy researcher at George Mason University in Virginia.

"In the current discussion of legalization of marijuana in the United States, we believe this study was a crucial step towards" understanding stroke risk in young marijuana users, Parekh told Live Science. "Even though cannabis is not [as] harmful or addictive as other substances, we cannot ignore its potential health risks."

A separate study, which will also be presented at the AHA meeting next week, found a link between marijuana use and an increased risk of heart arrhythmia (or rhythm problems) in young adults. The authors found that young people, or those between the ages of 15 and 34, who have cannabis-use disorder had a 47% to 52% increased risk of being hospitalized because of an arrhythmia.

The latter study has not yet been published in a peer-reviewed journal.