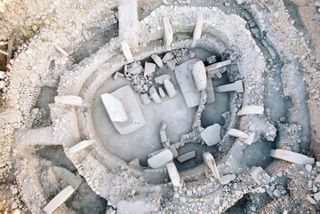 In Göbekli Tepe, archeologists have uncovered a handful of circular neolithic structures such as this one (Enclosure C), which consist of two T-shaped pillars surrounded by a bunch of slightly smaller inward-facing pillars.
(Image: © Gil Haklay/AFTAU.)

Hunter-gatherers might have built the world's oldest known temple on a precise geometric plan, according to new findings.

The Neolithic site, known as Göbekli Tepe, is perched atop a limestone mountain ridge in southeastern Turkey. The site's T-shaped pillars, which are carved with mystic drawings of animals, abstract symbols and human hands, are arranged in giant circles and ovals — each structure is made up of two large central pillars surrounded by smaller inward-facing pillars.

Göbekli Tepe (which translates to "potbelly hill" in Turkish) was built some 11,000 to 12,000 years ago — hundreds of years before any evidence of farming or animal domestication emerged on the planet. So it's thought that this massive undertaking was the work of hunter gatherers.

The impressive construction project, which predates Stonehenge by 6,000 years, is "a deviation from the hunting and gathering way of life," said senior author Avi Gopher, a professor in the Department of Archaeology and Ancient Near Eastern Civilizations at Tel Aviv University.

German archeologist Klaus Schmidt discovered the site — which appeared to be an ancient place of worship or religious gathering — in 1994.  The discovery sent shock waves through the field and challenged a long-standing theory that organized religion appeared only after cultures began adopting agriculture.

But with only a small fraction of the megaliths excavated, and ground surveys suggesting that at least 15 more of these circular enclosures are hidden underground, there's still much unknown about the site and the hunter-gatherers who built it.

One major mystery is how these different circular enclosures relate to each other. Were they all used at once or was one built and then abandoned and backfilled before the next was built?

To figure this out, Gopher and doctoral candidate Gil Haklay, also at Tel Aviv University in Israel, used a computer algorithm to analyze the underlying architecture of the site. The group measured distances within the enclosures and between the enclosures, the largest of which is more than 65 feet (20 meters) in diameter.

They found that the two centermost pillars aligned exactly with the midpoint of the circular structures. What's more, when they drew an imaginary line connecting the centerpoints of three of the structures, they found that it made a nearly perfect equilateral triangle, or one with three equal-length sides.

This suggests that these three structures were planned together in advance and built according to a "geometric design," Gopher said. Archaeologists believe that the hunter-gatherers must have excavated and moved the limestone rocks from a stone quarry nearby.

Related: Archaeologists are hot on the trail of these 16 spectacular mysteries

"Building one of these structures is a large project, but all three planned together means that these people had access to a lot of working power [and] a lot of energy," Gopher told Live Science.

Still, though the three enclosures were likely planned as a single project, dating methods can't show whether they were built at the exact same time or perhaps, a couple months or a couple of years apart, he said.

The "complexity of the architectural design," must have required a schematic or diagram that the builders used as a guide to reproduce the larger structures, the authors wrote. That means that our ancient forager ancestors had an understanding of conceptualizing a complex floor plan and reproducing it at any size, possibly using ropes to measure the location to erect each of the pillars, the authors wrote.

The idea that this site was carefully planned on a small-scale and then built on a grander one likely means there was some kind of leading group who was initiating, planning and running these projects, Gopher said.

However, there's no guarantee that a couple of master architects planned all three structures. This is not a "slam-dunk argument,"  but the researchers "produced a body of knowledge that might nudge us in that direction," said Tristan Carter, an expert on the site and an associate professor in the Department of Anthropology at McMaster University in Canada, who was not a part of the study.

Even though the three enclosures together form a theoretical triangle, that doesn't mean that one wasn't made first and then the other two were planned accordingly and built around them later on, and "you end up with an equilateral triangle," Carter told Live Science. Still, "if they're right, that's very exciting," and could give us an idea of how this place operated, he said.

Some of Göbekli Tepe's megaliths, which can be up to 18 feet (5.5 meters) tall and weigh as much as 50 tons (45 metric tons), are bare, while others are covered with impressive carvings of abstract symbols and animals such as foxes, lions, bulls, snakes and insects.

Each enclosure seems to have a dominant animal that's depicted a number of times, Carter said. This might mean that different hunter-gatherer groups — each with their own representative animal — could have been worshiping in enclosures specifically tailored to them. Hunter-gatherers are thought to have been largely animists — believing that everything from animals to plants have a spirit.  In animist cultures, representations of animals are typically related to specific cultural groups, he said.

But the largest of the enclosures, called enclosure D, has a wide variety of animal depictions, he said. What's more, enclosure D's two central pillars have carvings that might represent anthropomorphic "beings," according to the study. These two T-shaped pillars, with the horizontal crossbar at the top possibly representing the head, while the vertical pillar represents the body, have carvings that depict hands, arms, a belt and a possible groin cloth, the authors wrote. As Schmidt first suggested, this could mean that this enclosure is special — or perhaps the main structure.

In the new analysis, the researchers found further evidence of this enclosure's special rank: the main axis of the theoretical triangle — an imaginary line that's perpendicular to a line between enclosures B and C — passes through the center of enclosure D.

Whatever the origin story of Göbekli Tepe, it' "is the most remarkable place,"Carter said. "People weren't meant to be doing things as grand and as complex so early." During the period in which the Göbekli Tepe architects lived, a major change was happening.

While some archeologists argued natural changes in the environment or climate pushed society to agriculture, others argued that it was a change in consciousness.

It was a "very restless period, things were happening in the minds of people," Gopher said. People were changing their ideologies and their relationships with nature, and these changes likely enabled them to create a site like Göbekli Tepe and eventually move onto agriculture, he said.

The findings were published in May in the Cambridge Archeological Journal.