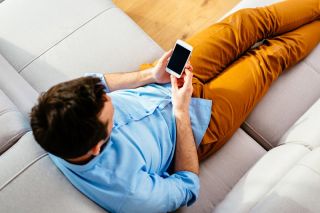 Too busy to exercise?

Sorry, not buying it.

A new study says many Americans have plenty of free time in the day for exercise but they spend that time looking at screens instead. The study, published Sept. 26 in the journal Preventing Chronic Disease, analyzed information from more than 32,000 Americans who took part in the American Time Use Survey from 2014 to 2016. This national survey gathers information from people ages 15 and older who record their activities over a 24-hour period.

On average, Americans reported more than 5 hours (300 minutes) of free time per day, and most of this time was spent watching TV or using electronic devices, such as smartphones or computers.

Related: How to Start an Exercise Routine and Stick to It

"There is a general perception among the public and even public health professionals that a lack of leisure time is a major reason that Americans do not get enough physical activity," study co-author Dr. Deborah Cohen, a physician-researcher at RAND, said in a statement. "But we found no evidence for those beliefs."

The authors used a fairly strict definition of what counts as "free time." For example, they excluded activities such as grocery shopping, cleaning, cooking, eating, sleeping, self-care (i.e., grooming) and playing with children.

Even so, the authors found that no age or ethnic group in the study reported less than 4.5 hours of free time per day.

People with higher incomes reported spending a larger share of their free time on physical activities and less time looking at screens compared with those in lower-income groups.

"Increasing the public's awareness of how they actually use their time and creating messages that encourage Americans to reduce their screen time may help people to become more physically active," Cohen said. "These findings suggest getting Americans to devote at least 20 or 30 minutes each day to physical activity is feasible." (U.S. guidelines recommend that people engage in 150 minutes of moderate aerobic activity per week.)

Still, the authors noted that to get more people to exercise, physical activity needs to be convenient and compelling enough to compete with screen time.