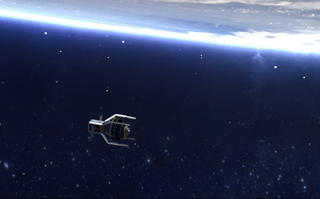 The largest garbage dump on Earth might be in space.

In low Earth orbit — the space around our planet up to about 1,200 miles (2,000 kilometers) in altitude — more than 3,000 defunct satellites and tens of millions of smaller pieces of debris clatter around the atmosphere. And each is moving at tens of thousands of miles per hour. Sometimes, two big pieces of this so-called "space junk" crash into each other, fragmenting into yet more junk, each one a tiny bullet of trash that could critically damage satellites and spacecraft.

It's a real problem. Now, the European Space Agency (ESA) has announced plans to tackle that problem, using robot hugs.

In a mission known as ClearSpace-1, ESA will launch an experimental, four-armed robot to grasp a defunct satellite in its clutches, hug the object close, then finally drag it on a kamikaze dive into Earth's atmosphere — destroying both devices. The impact of removing one dead satellite from orbit is a bit like taking one bucketful of water out of Lake Superior. But mission officials said in a statement that they hope the project will pave the way for the new regime of space-debris cleanup that our atmosphere desperately needs.

"The space debris issue is more pressing than ever before," Luc Piguet, founder and CEO of ClearSpace, the Swiss junk-removal startup partnering with ESA on the mission, said in the statement. "Today, we have nearly 2,000 live satellites in space and more than 3,000 failed ones. And in the coming years, the number of satellites will increase by an order of magnitude, with multiple mega-constellations made up of hundreds or even thousands of satellites planned for low Earth orbit."

The need for a cosmic "tow truck" to remove defunct satellites and make room for new ones is urgent, Piguet said.

Scheduled to launch in 2025, the ClearSpace-1 mission will test its robotic hugging muscles on a midsize piece of junk called Vespa, which ESA's Vega launcher deposited about 500 miles (800 km) above Earth in 2013. That conical chunk of debris weighs about 220 lbs. (100 kilograms), making it a relatively light and easy target for capture on the robot's debut mission.

After that capture, Vespa and the robotic garbage collector will make a controlled yet fiery descent into Earth's atmosphere. The cost of this one-time mission is estimated to be about $133 million, according to The Guardian.

Whether the mission proves to be a cost-effective way of clearing Earth's orbital trash remains to be seen. In the meantime, various other nations and agencies have proposed other junk-removal methods, including deploying tiny nets and using satellite-mounted lasers to blast bits of space debris into the atmosphere. Truly, it's an exciting time to be in the space garbage collection business!