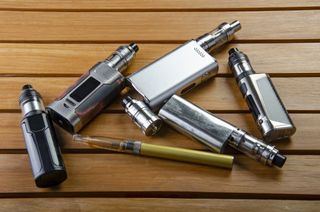 It's probably not a good idea to use e-cigarettes right now, according to public health officials.

In light of a spike in mysterious lung illnesses linked to vaping, the Centers for Disease Control and Prevention (CDC) is advising anyone who's concerned about these health risks to "consider refraining from using e-cigarette products" while the agency investigates the issue, officials said in a statement. So far, officials have identified 215 possible cases of lung disease tied to vaping in 25 states, but the cause is still unknown, the statement said.

Officials in Wisconsin issued a sterner warning against e-cigarettes, urging residents to "stop using any vape and/or e-cigarette devices immediately," according to a recent statement from the City of Milwaukee Health Department. So far, 16 people in the city have been hospitalized with severe lung disease tied to vaping, the statement said.

Even aside from the ongoing investigation of vaping and lung disease, e-cigarettes should not be used by youth, young adults, pregnant women or adults who currently don't use tobacco products, the CDC said. What's more, people should not buy e-cigarette products off the street and should not modify the products or add substances that aren't intended for vaping by the manufacturer.

People who do decide to use e-cigarettes should monitor themselves for symptoms such as cough, shortness of breath and chest pain, and promptly seek medical attention if they become concerned about their health, the CDC said.

Government officials are investigating which brands and types of e-cigarette products may be involved in these cases. Many patients reported vaping THC products before they got sick. However, it's still unclear if all of the cases have a common cause or if they are different diseases with similar symptoms, the agency said.