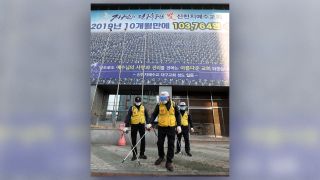 Officials disinfect a church in Daegu, South Korea, on Feb. 20.
(Image: © YONHAP/EPA-EFE/Shutterstock)
All about COVID-19

Update (Sunday, Feb. 23): The number of coronavirus cases in South Korea has soared to about 602, according to The New York Times. More than half of those cases involve members of, or those somehow linked to, the religious sect, the Shincheonji Church of Jesus, where a so-called superspreader infected at least 37 people last week.

A so-called superspreader infected at least 37 people at her church with the new coronavirus, and dozens of additional worshippers are also showing symptoms of the disease, called COVID-19, according to news reports.

The 61-year-old woman attends the Shincheonji Church of Jesus the Temple of the Tabernacle of the Testimony in Daegu, South Korea, according to the international news outlet AFP. The city, located in the southern part of the country, is home to about 2.5 million people. The woman, called "Patient 31" by Korea's Centers for Disease Control and Prevention, developed a fever on Feb. 10 and attended four church services before being diagnosed with COVID-19.

Despite running a fever, the woman twice refused to be tested for the coronavirus, as she had not recently traveled abroad, according to The Guardian. So far, she and 37 other members of the church have tested positive for the novel coronavirus, called SARS-CoV-2, and 52 additional churchgoers have shown symptoms of infection but have not yet been tested. (SARS-CoV-2 is the name of the coronavirus that causes COVID-19.)

Authorities described the outbreak as a "super-spreading event," as the lone woman transmitted the infection to an unusually high number of people, according to Reuters. Current estimates suggest that a single person with the novel coronavirus spreads the infection to about 2.2 additional people, on average. The surge of infection at the church brings the total number of confirmed cases in South Korea to 104; one death associated with the virus has occurred in the country so far.

Related: The 9 deadliest viruses on Earth

"We are in an unprecedented crisis," Daegu Mayor Kwon Young-jin said during a news conference this week, Reuters reported. "We've asked [all members of the church] to stay at home, isolated from their families." Additionally, Kwon advised residents of Daegu to stay indoors and ordered that all schools for young children and public libraries be shut down, according to The Guardian. Local and U.S. military forces stationed in the city have been forbidden from traveling off base or receiving outside guests.

"It's like someone dropped a bomb in the middle of the city. It looks like a zombie apocalypse," resident Kim Geun-woo told Reuters by phone in regard to the abandoned streets of the city.

The Shincheonji church announced today (Feb. 20) that it had closed down all of its facilities nationwide, according to The Guardian. "We are deeply sorry that because of one of our members, who thought of her condition as a cold because she had not traveled abroad, led to many in our church being infected and thereby caused concern to the local community," officials said in a statement.

In the United Kingdom, a British man spread the virus to 11 people at a French ski resort after he had visited Singapore for a conference. That was also considered a super-spreading event.