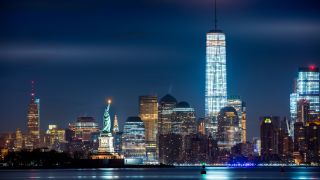 —To date, 40,000 health care workers, including retirees and students, have volunteered to help with the state’s health care force during the pandemic. Also, more than 6,000 mental health professionals will provide free online mental health services: Schedule an appointment by calling 1-844-863-9314.

—The current case number means that nearly 3 in 1,000 people in New York City is infected with COVID-19.

—On March 27, Gov. Andrew Cuomo announced the completion of a 1,000 bed temporary hospital at Jacob K. Javits Convention Center, a large building on Manhattan's west side near the Hudson River. It was constructed with the help of the National Guard and is the first of several similar temporary hospitals planned for the state.

The seemingly miles of beds being set up at Javits. It is absolutely unreal to see what the National Guard & first responders have put together here in just days. pic.twitter.com/dD0AQg4PO4March 27, 2020

—On March 20, Cuomo ordered all businesses to send home 100% of their workforce. Exemptions include: shipping, media, warehousing, grocery and food production, pharmacies, health care providers, utilities, banks and related financial institutions, according to a statement from Cuomo’s office.

—He also placed restrictions on all New Yorkers, requiring social distancing (6 feet between individuals) when in public, including for everyone in grocery stores and other "essential" businesses.

—All public schools in the state are closed until April 1.

—All elective and non-critical surgeries will be canceled beginning Wednesday (March 25) in the state.

(Note: Contact your local health department for questions about getting tested.)

As of March 25, 145,753 COVID-19 tests have been run in the state, with 44,635 testing positive and 6,844 individuals hospitalized with the virus, according to the COVID Tracking Project.

In addition, drive-through facilities are now open at the following locations.

The drive-through sites are prioritizing sampling for individuals that are part of the highest risk population.

Who can get COVID-19 testing in New York?

The state has set up an online tool to help you assess whether you should get a COVID-19 test.

According to the state Department of Health:

"Testing for COVID-19 shall be authorized by a health care provider when:

—An individual has come within proximate contact (same classroom, office, or gatherings) of another person known to be positive; or

—An individual has traveled to a country that the CDC has issued a Level 2 or Level 3 Travel Health Notice, and shows symptoms of illness; or

—An individual is quarantined (mandatory or precautionary) and has shown symptoms of COVID-19 illness; or

—An individual is symptomatic and has not tested positive for any other infection; or

—Other cases where the facts and circumstances warrant as determined by the treating clinician in consultation with state and local department of health officials."

— NYC has set up a page for the public to find ways to help others during the outbreak, including how to donate blood, how to donate food, how to share community and several other avenues of contribution.

—Other closings include: Statue of Liberty, Ellis Island and the Empire State Building, the Times reported.

— The Met Opera will stream operas for free.

—Visitations will be suspended at the city's jails, the Times reported.

—No plans as of yet to close the city's public transportation.

In the state's first reported death linked to the virus, an 82-year-old woman from Brooklyn died after contracting COVID-19, The New York Times reported Saturday (March 14). The woman had an underlying health condition, emphysema, which likely contributed to the severity of her case. The state's second reported death was a 64-year-old from Suffern, a village in Rockland County, the Wall Street Journal reported. That individual had tested positive for the virus and "had other significant health problems, which were likely contributory to death," the Rockland County medical examiner said, according to the WSJ.

Due to the large cluster of cases in New Rochelle, in Westchester County, New York, Gov. Andrew Cuomo announced a 1-mile-radius (1.6 kilometers) "containment zone" in the area. The National Guard has entered the area, schools and public buildings in that zone are being closed, but roadways are open, The New York Times reported. In addition, schools, houses of worship and other facilities hosting large gatherings will be closed from March 21–25, the state Department of Health announced.

Though New York City Mayor Bill de Blasio said the city was "going to do our damnedest to keep the schools open," on Sunday evening (March 15), he announced the country's largest public school system would be closed from Monday, March 16, through at least Monday, April 20.

"I know just how much our parents depend on our public schools. I know right now there are so many parents who do not necessarily have any other place for their children, there are so many parents who depend on their schools for meals for their children. There are so many public servants who depend on our first responders, health care workers who need their kids to be in school," de Blasio said. "So for everyone who's wondering why this has been such a difficult decision is because I know the full cost of shutting our schools. I know all of the negative ramifications of this decision." The decision will impact the more than 1 million kids (and their families) who attend the NYC public schools.

The first Manhattan case involves a woman who had recently traveled to Iran and is now isolated in her home as of March 1. The second case in the state was reported on March 3 in a man who lives in New Rochelle, New York, in Westchester County and works in Manhattan. On Wednesday (March 4), Gov. Cuomo confirmed there were nine additional cases of people connected to the man, including his 20-year-old son, 14-year-old daughter and a neighbor who drove the man to the hospital, the Times reported. In addition, a friend of the infected man, along with the friend's wife and three of their kids, according to the Times.