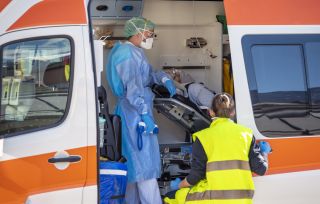 COVID-19 is now the leading cause of death in the United States, killing more people per day than the previous top contenders, heart disease and cancer.

The new coronavirus was responsible for the deaths of 1,940 people on April 8 in the U.S., according to a graph published by Dr. Maria Danilychev, who specializes in geriatric medicine, internal medicine, and hospice and palliative medicine at Scripps Health in San Diego.

In comparison, heart disease and cancer took the lives of 1,774 and 1,641 people on a daily basis, respectively, according to Centers for Disease Control and Prevention (CDC) data from 2018, the most recent year available, Danilychev wrote on the chart. Danilychev gathered the COVID-19 numbers from Worldometers.info.

COVID-19's grim new position is happening as several states, including New York, New Jersey and Michigan, are hitting what may be their peaks. Last week, COVID-19 was the third leading cause of death in the country, with 1,051 deaths on April 3, Danilychev noted.

Danilychev's animation, which shows the top 15 causes of death in the United States, can be seen here. Of note, the COVID-19 data shows actual U.S. deaths, while the other causes of death are extrapolated daily averages from 2018.

This analysis makes sense, said Dr. William Schaffner, an infectious-diseases specialist at Vanderbilt University in Tennessee, who wasn't involved with the project.

"One of the things that's dropped off the list is trauma deaths, because people are not out banging into each other with their automobiles and things such as that," he said. It wouldn't be surprising if COVID-19 was a top killer in other developed countries, too, as these nations hit their peaks, including in Italy and Spain, "both countries that were very hard hit and are now leveling off," Schaffner told Live Science.

The only other modern outbreak in developed countries that affected death rates so dramatically is HIV, which causes AIDS, Schaffner said. "It became, for a period of time, one of the leading causes of deaths for young adults before it was controlled with treatment," he said.

However, it appears that measures taken to control COVID-19, such as sheltering at home and social distancing, are working.

"We're actually, in many parts of the country now, starting to turn this virus down," Schaffner said. "It's happening in the state of Washington and California. Even New York City thinks they may see a downturn."