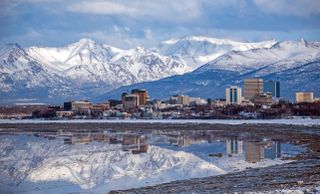 Alaska has 69 confirmed cases of COVID-19 as of Friday (March 27), according to the Alaska Department of Health and Social Services.

This puts Alaska near the bottom of the list of states for the most U.S. coronavirus cases.

Officials reported the first death of an Alaskan from coronavirus on Wednesday (March 26), according to Anchorage Daily News. The patient was being treated for heart failure at a hospital in Washington state when he died, and may have contracted the virus there, Anchorage Daily News reported. Although the death occurred in Washington, it is considered an Alaska case, officials said.

Among all Alaska cases, 26 are travel related, 10 are non-travel related, 20 are linked to close contact with a confirmed case and 13 are still being investigated, according to public health officials.

Starting Wednesday (March 25) all people arriving in Alaska will be required to self-quarantine for 14 days, according to a new mandate from Alaska Governor Mike Dunleavy.

Residents of Anchorage have been ordered to "hunker down" starting 10:00 pm Sunday (March 22) through Tuesday, March 31, according to Anchorage Daily News. Under the order, people should stay at home as much as possible, except to work critical jobs, get groceries or other important goods, receive or deliver health care or get fresh air without contacting others.

On March 19 Officials issued an order requiring the postponement of elective surgical procedures for three months, and elective or non-urgent dental procedures (such as teeth cleanings) for one month.

Starting March 18 at 5 p.m., all restaurants, bars, breweries and cafes will be prohibited from offering dine-in service; and all theaters, gyms, fitness centers, bowling alleys and bingo halls will close, according to Anchorage Daily News.

On March 16, Alaska Governor Mike Dunleavy announced that all libraries, museums and archives will be closed to the public from March 17 through March 31.