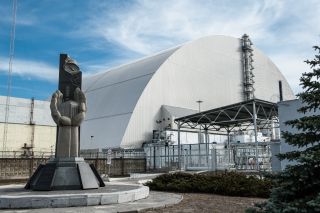 The giant structure originally constructed around the Chernobyl nuclear power plant in 1986 to contain the radioactive material released in one of history's worst nuclear disasters is crumbling. Soon, it will be torn down.

The Ukranian company managing the nuclear power plant, SSE Chernobyl NPP, recently signed a contract with a construction company to take the structure apart by 2023, according to a statement. That's when the sarcophagus will reach the end of its stable life and "expire," so to speak.

But that doesn't mean radioactive material will just slip out into the world. In 2016, a large steel structure called the "New Safe Confinement" was crafted to blanket the sarcophagus and the radiation underneath it. This confinement structure, 354 feet (108 meters) high, was built a distance from the radioactive site and slid into place with 224 hydraulic jacks, according to a previous Live Science report.

The New Safe Confinement is expected to last at least 100 years and is strong enough to withstand a tornado, according to the report. On the other hand, the crumbling sarcophagus underneath it wasn't built to last long, and was a kind of Band-Aid approach to quickly contain the radiation during the time of the accident. [10 Times HBO's 'Chernobyl' Got the Science Wrong]

The sarcophagus is massive, made up of over 7,700 tons (7,000 metric tons) of metal and 14.1 million cubic feet (400,000 cubic meters) of concrete. But it's flimsy — it doesn't have any welded or bolted joints — and could be easily knocked down by an earthquake, according to the report.

It stays upright, not through sturdy engineering but through the force of gravity, according to the statement. Dismantling it will be "extremely complicated" and will happen under conditions of "high nuclear and radiation risk," the statement said.

But the plan is to take apart the sarcophagus piece by piece — all the while reinforcing the pieces that are left so that they won't collapse. If they do collapse, radioactive material could be released within the new safe confinement, according to the statement.

The disassembled parts will then be cut into smaller pieces, decontaminated and transported in shipping casks to be processed or thrown away — marking the end of a giant project that will cost around $78 million.

Editor's note: This article was updated to clarify that it's not the new dome-shaped structure that's being dismantled, it's the sarcophagus underneath.