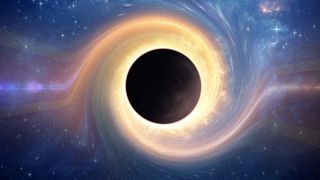 When two neutron stars slammed together far off in space, they created a powerful shaking in the universe — gravitational waves that scientists detected on Earth in 2017. Now, sifting through those gravitational wave recordings, a pair of physicists think they've found evidence of a black hole that would violate the neat model drawn from Albert Einstein's theory of general relativity.

In general relativity, black holes are simple objects: infinitely compressed singularities, or points of matter, surrounded by smooth event horizons through which no light, energy or matter can escape. Until now, every bit of data we've gleaned from black holes has supported this model.

But in the 1970s, Stephen Hawking wrote a series of papers suggesting that the borders of black holes aren't quite so smooth. Instead, they blur thanks to a series of effects linked to quantum mechanics that allow "Hawking radiation" to escape. In the years since, a number of alternative black hole models have emerged, where those smooth, perfect event horizons would be replaced with flimsier, fuzzier membranes. More recently, physicists have predicted that this fuzz would be particularly intense around newly formed black holes — substantial enough to reflect gravitational waves, producing an echo in the signal of a black hole's formation. Now, in the aftermath of the neutron star collision, two physicists think they've found that type of echo. They argue that a black hole that formed when the neutron stars merged is ringing like an echoing bell and shattering simple black hole physics.

If the echo is real, then it must be from the fuzz of a quantum black hole, said study co-author Niayesh Afshordi, a physicist at the University of Waterloo in Canada.

"In Einstein's theory of relativity, matter can orbit around black holes at large distances but should fall into the black hole close to the event horizon," Afshordi told Live Science.

So, close to the black hole, there shouldn't be any loose material to echo gravitational waves. Even black holes that surround themselves with disks of material should have an empty zone right around their event horizons, he said.

"The time delay we expect (and observe) for our echoes ... can only be explained if some quantum structure sits just outside their event horizons," Afshordi said.

That's a break from usually unshakable predictions of general relativity.

That said, data from existing gravitational wave detectors is noisy, difficult to properly interpret and prone to false positives. A gravitational wave echoing off some quantum fuzz around a black hole would be an entirely new sort of detection. But Afshordi said that in the immediate aftermath of the merger, that fuzz should have been intense enough to reflect gravitational waves so sharply that existing detectors could see it.

Joey Neilsen, an astrophysicist at Villanova University in Pennsylvania who wasn't involved in this paper, said that the result is compelling — particularly because the echoes turned up in more than one gravitational wave detector.

"That's more convincing than combing through data looking for a specific kind of signal and saying, 'aha!' when you find it," Neilsen told Live Science.

Still, he said, he'd need to see more information before he was absolutely convinced that the echoes were real. The paper doesn't account for other gravitational wave detections gathered within about 30 seconds of the reported echoes, Neilsen said.

"Because significance calculations are so sensitive to how you pick and choose your data, I would want to understand all those features more fully before I drew any firm conclusions," he said.

Maximiliano Isi, an astrophysicist at MIT, was skeptical.

"It is not the first claim of this nature coming from this group," he told Live Science.
"Unfortunately, other groups have been unable to reproduce their results, and not for lack of trying."

Isi pointed to a series of papers that failed to find echoes in the same data, one of which, published in June, he described as a "a more sophisticated, statistically robust analysis."

Afshordi said that this new paper of his has the advantage of being far more sensitive than previous work, with more robust models to detect fainter echoes., adding, "the finding that we reported... is the most statistically significant out of the dozen searches [I discussed], as it had the false alarm chance of roughly 2 out of 100,000."

Even if the echo is real, scientists still don't know precisely what sort of exotic astrophysical object produced the phenomenon, Neilsen added.

"What's so interesting about this case is that we don't have any idea what was left after the original merger: Did a black hole form right away, or was there some exotic, short-lived intermediate object?" Neilsen said. "The results here are easiest to make sense of if the remnant is a hypermassive [neutron star] that collapses within a second or so, but the echo presented here isn't convincing to me that that scenario is what actually happened."

It is possible there are echoes in the data, Isi said, which would be enormously significant. He's just not convinced yet.

Regardless of how all the data shakes out, Neilson said, it's clear the result here is pointing at something worth exploring further.

"Astrophysically, we're in uncharted territory, and that's really exciting." he said. The paper was published Nov. 13, 2019, in the Journal of Cosmology and Astroparticle Physics.