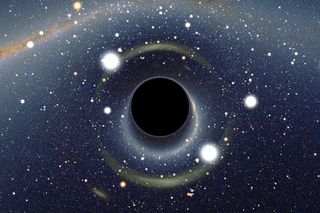 Stephen Hawking died today (March 14), leaving behind a massive legacy of work as an astrophysicist, science communicator, activist, and figure of pop culture admiration. And on the day of his death, a question he raised and worked on until the last years of his life remains unanswered: Can information really be lost to the universe?

Hawking's most famous paper, "Black Hole Explosions?," published 44 years ago in 1974, took a hatchet to the whole notion of black holes as physicists had previous understood them. And it was Hawking's first whack at that basic question.

"Classically, a black hole should be 'perfectly cold' in the sense that it absorbs everything but emits nothing. This is how they were understood in the early 1970s," Robert McNees, a physicist at Loyola University in Chicago, wrote in an email. [Stephen Hawking's Most Intriguing Quotes on Humanity, Aliens and Women]

A black hole like that would radiate no energy, and no matter could escape from it. It would just… exist, cold, silent, and eternal. Hawking's paper made the black holes alive ­— and possibly mortal.

"When Stephen considered quantum mechanical effects in the mid-70s, he discovered that black holes should, in principle, radiate as if they were thermal objects with a temperature," McNees told Live Science. "If they radiate energy then their mass will decrease. And he found that as this happens, as they shrink, their temperature goes up and they radiate even faster."

Eventually, perhaps, the black hole would disappear entirely, or shrink to a little nubbin. Without fully reconciling relativity and quantum mechanics in a robust theory of "quantum gravity" (what physicists call a "theory of everything"), the final stage of that black hole evaporation remains a mystery.

"The problem is that, according to his calculations, the radiation is perfectly thermal. It doesn't retain any information about the state of the material that formed the black hole, and this would violate a fundamental rule in quantum mechanics," McNees wrote.

Quantum physics requires that the whole future and past of every particle should be, in principle, possible to figure out and link through a series of chained, causal, probabilistic events. But if a black hole release an undifferentiated soup of particles with their information — their histories — unrecoverably erased, then that requirement is fundamentally broken. [Stephen Hawking's Most Far-Out Ideas About Black Holes]

"[Physicists call this] the 'black hole information paradox,' and attempts to resolve it have driven much of the work in quantum gravity since it was first articulated," McNees wrote.

Hawking was already an accomplished physicist by 1974. And many brief biographies imply that, following the publication of his 1988 popular science book "A Brief History of Time," his most important scientific work was behind him. But Hawking continued to produce significant and controversial scientific papers until as recently as this decade, wrangling with the paradox he introduced decades earlier.

The most dramatic late-career paper Hawking wrote suggested the black holes as they've classically been understood don't exist at all.

In "Information Preservation and Weather Forecasting for Black Holes," published in 2014, he suggested that the "event horizon" around black holes, the point beyond which even light could not escape, doesn't really exist. Instead, he wrote, there's simply an "apparent" horizon of trapped light which could fade away and allow the light to escape.

"The absence of event horizons mean that there are no black holes — in the sense of regimes from which light can’t escape to infinity," Hawking wrote.

He also suggested some fundamental conceptual problems with a number of features physicists had attributed to black holes, like "firewalls" around their boundaries that destroy observers who try to enter.

The research team argued that black holes are surrounded by "soft" or zero-energy particles, which they call hair. That hair, they wrote, stores the lost information of particles emitted by black holes on "holographic plates" beyond the black holes' boundary regions. So the information, while displaced, is never truly lost.

"A complete description of the holographic plate and resolution of the information paradox remains an open challenge, which we have presented new and concrete tools to address," they wrote.

Even near the end of his life, Hawking remained very much a working scientist, presenting ideas that advanced his field, and ideas his colleagues rejected.

"It's my impression that the 2014 paper is not widely accepted. The 2016 paper, on the other hand, which is work with Perry and Strominger, is a direction that people are still actively working on," McNees wrote.

"The black hole information paradox has been one of the defining questions for people working on quantum gravity. And, as it remains unanswered, I think it remains the most interesting question that [Hawking] raised."