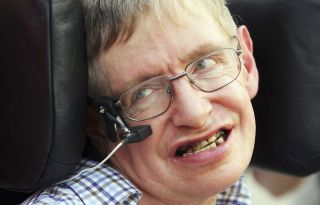 Though the famed physicist and cosmologist Stephen Hawking could speak only through a device in his cheek muscle, he had plenty of intriguing, and sometimes scary, things to say during his lifetime — cut short by ALS, or Lou Gehrig's disease.

Hawking died peacefully today (March 14) at his home in Cambridge, England. As his family, colleagues and the many who were and are inspired by him mourn his death and celebrate his life, we look back at his most memorable and intriguing words, including his most prescient predictions for the future of humanity. [Stephen Hawking, Famed Physicist Who Defied ALS Odds, Dies at 76]

During a video presentation Nov. 5, 2017, at the Tencent Web Summit in Beijing, the famed cosmologist warned that the ever-rising human population, and its mounting energy needs, could render Earth uninhabitable by the year 2600, according to the British newspaper The Sun.

"Shouldn't we be content to be cosmic sloths, enjoying the universe from the comfort of Earth? The answer is, no," Hawking said June 20, 2017, during a talk at Starmus, an arts and science festival in Norway whose advisory board he sat on. "The Earth is under threat from so many areas that it is difficult for me to be positive."

"One day, we might receive a signal from a planet like this," Hawking said, referring to the potentially habitable alien planet Gliese 832c. "But we should be wary of answering back. Meeting an advanced civilization could be like Native Americans encountering Columbus. That didn't turn out so well," he added in 2016 during the documentary "Stephen Hawking's Favorite Places," which streamed on the CuriosityStream video service.

"The human failing I would most like to correct is aggression," Hawking said, according to The Independent. "It may have had survival advantage in caveman days, to get more food, territory or partner with whom to reproduce, but now it threatens to destroy us all." — February 2015, during a tour of London's Science Museum.

"We are close to the tipping point, where global warming becomes irreversible. Trump's action could push the Earth over the brink, to become like Venus, with a temperature of 250 degrees [Celsius], and raining sulfuric acid," he told BBC News, referring to the president's decision in June 2017 to pull the U.S. out of the Paris climate deal.

"Although the chance of a disaster to planet Earth in a given year may be quite low, it adds up over time, and becomes a near certainty in the next thousand or 10 thousand years," Hawking told the audience during a public Q&A session after the BBC Reith lecture in England in 2016.

On April 16, 2013, during a lecture entitled "The Origin of the Universe," Hawking mentioned the idea that people continue to seek divine solutions to counter physicist's theories, quipping, "What was God doing before the divine creation? Was he preparing hell for people who asked such questions?”

"The development of full artificial intelligence could spell the end of the human race," Hawking told the BBC in December 2014.

"If aliens ever visit us, I think the outcome would be much as when Christopher Columbus first landed in America, which didn't turn out very well for the Native Americans," Hawking said in 2010 during an episode of the Discovery Channel's "Into the Universe with Stephen Hawking," a show hosted by the Discovery Channel, reported The Times, a U.K.-based newspaper.

"The whole history of science has been the gradual realization that events do not happen in an arbitrary manner, but that they reflect a certain underlying order, which may or may not be divinely inspired," Hawking wrote in his popular physics best-seller "A Brief History of Time."

"It is a waste of time to be angry about my disability. One has to get on with life and I haven't done badly. People won't have time for you if you are always angry or complaining," Hawking said in 2005 during an interview with The Guardian's Emma Brockes.

During a Reddit AMA in 2015, Hawking was asked: "What mystery do you find most intriguing, and why?" His answer? "Women. My PA reminds me that although I have a PhD in physics, women should remain a mystery."

As for his mortality, Hawking was remarkably blunt.

"I regard the brain as a computer which will stop working when its components fail," Hawking said in The Guardian interview. "There is no heaven or afterlife for broken-down computers; that is a fairy story for people afraid of the dark."