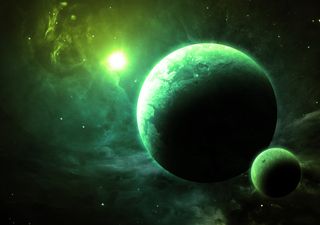 Alien life-forms could glow in spectacular reds, blues and greens to shield themselves from stellar bursts of ultraviolet (UV) radiation. And that glowing light could be how we find them, according to a new study.

Most of the potentially habitable exoplanets we know of orbit red dwarfs — the most common type of star in our galaxy and the smallest, coolest stars in the universe. And thus red dwarfs, such as Proxima Centauri or TRAPPIST-1, are at the forefront of the search for life. But if extraterrestrial life does exist on these planets, they have a major problem.

Red dwarfs often flare, or give off a burst of UV radiation that could harm life on planets around it. "A lot of the potentially habitable nearby planets we are starting to find are likely to be high-UV worlds," said lead author Jack O'Malley-James, a research associate at the Cornell Center for Astrophysics and Planetary Science. So "we were trying to think of ways that life could deal with the high levels of UV radiation that we expect on planets orbiting red dwarf stars."

Organisms on our own planet protect themselves from UV radiation in a variety of ways: living underground, living underwater or using sun-shielding pigments, O'Malley-James said. But there's one way that life on Earth deals with UV that would also make life "easier" to detect — biofluorescence.

Certain corals on our own planet protect themselves from the sun's UV rays by glowing, he said. Their cells often contain a protein or pigment that, once exposed to UV light, can absorb some of the energy from each photon, causing it to shift to a longer and safer wavelength. For example, some coral can convert invisible UV light into visible green light.

O'Malley-James and his team analyzed the fluorescence produced by coral pigments and proteins, then used that to model the types of light that could be emitted by life on red dwarf-orbiting planets. They accounted for various features of potential exoplanets, such as cloud cover. It turned out that a cloud-free planet covered in fluorescing creatures could produce a temporary change in brightness that's potentially detectable. What's more, because red dwarfs aren't as bright as our sun, they wouldn't mask these potential biosignatures, or signs of life.

But "for us to have a chance of detecting biofluorescence on a planet, a large portion of the planet would have to be covered by whatever creatures are fluorescing," O'Malley-James said. What's more, we don't yet have telescopes strong enough to detect even a planet where every inch of its surface is covered in glowing creatures.

But the next generation of telescopes, such as the European Extremely Large Telescope, could detect these glimmers of life, he said. Even with those telescopes, these exoplanets would be only faint pinpricks of light, but instruments could then decode how much red, green or infrared light is being emitted. If extraterrestrial organisms glowed green, for example, then the amount of green light during a flare would increase.

Still, the glow would need to be "very bright" for us to detect it, he said.

"We don't see fluorescence that is that strong on Earth because we don’t have such high levels of UV on our surface." The new study also assumes  that life on planets orbiting red dwarfs would have evolved very bright fluorescence over millions of years, he said.

If one day we could travel to one of these glowing planets, it would be "a lot more exciting to view," he said. Hovering in a spaceship nearby, we would see what looked like "a super-charged northern lights covering the surface of the planet."

The findings were published Aug. 13 in the journal Monthly Notices of the Royal Astronomical Society.