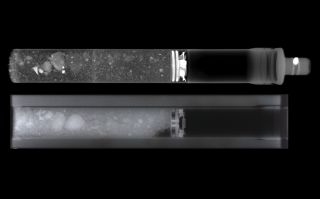 A section of rock collected from the moon 47 years ago has been opened for the first time on Earth.

The sample was opened Nov. 5 at the Johnson Space Center in Houston. The tube-shaped cylinder of rock and moon dust (or regolith) is 2 feet (61 centimeters) long and 1.5 inches (4 cm) in diameter.

The new sample analysis is in service of the Artemis program, a new push by NASA and other space agencies that aims to put a man and woman back on the moon by 2024. The ultimate goal is to build a sustained presence on the moon by 2028, which would be used as a launching point for missions to Mars. But regardless of future plans, the 47-year-old Apollo samples have a story to tell.

"Opening these samples now will enable new scientific discoveries about the moon and will allow a new generation of scientists to refine their techniques to better study future samples returned by Artemis astronauts," Francis McCubbin, NASA's astromaterials curator at Johnson Space Center, said in a statement. "Our scientific technologies have vastly improved in the past 50 years, and scientists have an opportunity to analyze these samples in ways not previously possible."

Between 1971 and 1972, astronauts with the Apollo 15, 16 and 17 missions collected lunar samples to bring back to Earth for future study. Most samples have been studied, but some have remained sealed in their original containers, with the goal of saving them for technological advances that would allow for improved analysis. Astronauts Gene Cernan and Jack Schmitt collected the sample that was opened Nov. 5 — Sample 73002 — near the Lara Crater.

High-tech analysis was even involved in the opening of the sample. Researchers at the University of Texas, Austin, used X-ray computer tomography, a procedure that uses a laser-beam-like stream of X-rays to create cross-sectional images of an object, to understand the sample's position in the tube. The scientists will also use the data to record the positions of individual grains and small pieces of rock called "rocklets" within the original sample.

The removal took place inside a sealed glove box — a box with gloves attached so that researchers can manipulate the sample inside — filled with dry nitrogen gas. The procedure hasn't taken place in 25 years, according to NASA.

Preparing for the lunar future

Sample 73002 was then subdivided and will be sent in pieces to different researchers involved with the NASA Apollo Next-Generation Sample Analysis (ANGSA) initiative. The moon rocks will undergo mass spectrometry, a method that allows scientists to identify the molecules present in a sample. They'll be three-dimensionally imaged and sliced into wisp-thin sections for microtomy research. This high-resolution microtomy will allow an unprecedented look at the sample's structure and composition.

NASA is also looking forward to opening a second Apollo 17 sample — sample 73001. This sample was collected at the same time and place as 73002, but unlike 73002, it was stored in a vacuum container on the moon, which was then placed in a second vacuum container on Earth. That means the sample holds not only moon rock, but any moon gases that were scooped up along with the sample. NASA scientists are still working out ways to make sure all of those gases are collected when the vacuum container is opened. They plan to open that sample in early 2020.

"The findings from these samples will provide NASA new insights into the moon, including the history of impacts on the lunar surface, how landslides occur on the lunar surface, and how the moon's crust has evolved over time," Charles Shearer, science co-lead for ANGSA, said in the statement. "This research will help NASA better understand how volatile reservoirs develop, evolve and interact on the moon and other planetary bodies."