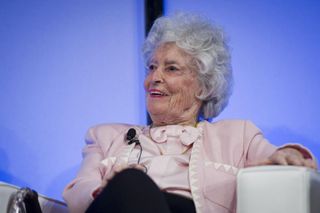 Annie Glenn is pictured at a celebration dinner at The Ohio State University honoring the 50th anniversary of John Glenn's historic flight aboard Friendship 7, on Feb. 20, 2012, in Columbus, Ohio.
(Image: © Bill Ingalls/NASA)

Annie Glenn, widow of the late NASA astronaut and U.S. Senator John Glenn — the first American to orbit the Earth — has died, NASA announced yesterday. She was 100.

"We are deeply saddened by the passing of Annie Glenn. A stalwart member of the space and military communities, her courageous support of her legendary husband John was unmatched," NASA officials said in a statement.

Annie Glenn died  yesterday (May 19) at a nursing home near St. Paul, Minnesota after suffering complications from COVID-19, the disease caused by the novel coronavirus, according to the Associated Press (AP).

Related: Photos of John Glenn, the first American in orbit

Annie Glenn was an advocate for people with disabilities and communication disorders, having struggled with a speech impairment for much of her life. She married John Glenn in 1943 and had been his spouse for 73 years when he died in 2016 at the age of 95.

On Feb. 20, 1962, Annie Glenn watched her husband launch into space on the Mercury-Atlas 6 mission. On that mission, John Glenn became the first American to orbit the Earth when he circled the planet three times before safely splashing down in the Atlantic Ocean.

As was the case with all of the astronauts' wives, Annie Glenn was thrust into the spotlight when her husband launched on that historic mission. However, she shied away from the media attention because of her stutter. She overcame the speech impairment at age 53 after attending a three-week treatment program at Hollins Communications Research Institute in Roanoke, Virginia.

When John Glenn launched into space again at age 77 — becoming the oldest person to ever go to space — Annie Glenn had become more comfortable with her public role and was more willing to speak to the press, the AP reported.

"She provided an example for other women who followed to face the challenges of being part of our nation's space program, and the stress of having spouses in combat," NASA said in the statement. "She stood steadfastly by her husband as he took to space once again as the oldest person to orbit Earth, even as she continued her own lifelong public service on behalf of children, the elderly, and the disabled."

"The Glenns dedication to each other is well known, and we looked to them as an unmatched example of the strength and compassion that a lifetime of devotion creates. She will be missed," the statement added.