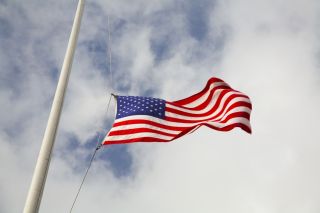 For 149 years, Americans have taken the last Monday in May to remember those who have died in our wars. Like all deaths honored by the state, flags fly at half-staff. However, on Memorial Day, the U.S. flag flies at half-staff only for the first half of the day, and then is raised to full height from noon to sundown. This unique custom honors the war dead for the morning and living veterans for the rest of the day.

No one knows the exact date this tradition began, but an Army regulations book from 1906 carries instructions for the procedure, so it predates the 20th century, said Clark Rogers, executive director of the National Flag Foundation. In 1924, Congress codified the tradition into U.S. Code Title 4, Section 6, with the proclamation, “For the nation lives, and the flag is a symbol of illumination,” explaining how the noon flag-raising symbolizes the persistence of the nation in the face of loss, Rogers told LiveScience. [The True Story Behind the 1st Memorial Day]

The precise origin of a half-raised flag as a way to honor the fallen is also unclear, Rogers said. Some traditions say the lowered flag allows room for an invisible flag of death to fly above it. Others point to the tradition in naval warfare of lowering a flag to indicate surrender. There are also claims that lowering a flag symbolically recreates the ancient Greco-Roman tradition of signaling death with a broken column or staff, Rogers said. Currently, at least 21 countries use a lowered flag to honor the dead.

For instance, on Oct. 22, 2012, Cambodia flew their flag at half-mast to mourn the death of their King-Father Norodom Sihanouk, according to news reports. Canada flies its flags at half-mast several days every year, such as on June 23 for the National Day of Remembrance for Victims of Terrorism. In Finland, the word for flying the flag at half-staff is "suruliputus." On Anzac Day, April 25, in Australia, the flag is flown at half-staff until noon to honor those who served and died in war.

Honoring the dead, especially the war dead, played a key role in post-Civil War America, said David Blight, a professor of history at Yale University and author of "Beyond the Battlefield: Race, Memory, and the American Civil War" (University of Massachusetts Press, 2002). Both the Union and the Confederacy began honoring lost soldiers before the war even ended, as war widows combed battlefields in search of their fallen relatives. Eventually, the flowers that mourners left at the graves across the nation merged with the May celebrations of freed slaves to form a national Memorial Day, Blight said.

The celebration of this holiday, which gained an official designation on May 30, 1868, began falling out of practice in the beginning of the 20th century, but then reentered popular practice during World War I, Blight said.

Then, after World War II, advocacy by veterans' groups led to the creation of a separate holiday for living military personnel in the form of Veteran’s Day, Blight said. Thus, Memorial Day became a day for exclusively celebrating the sacrifice of those who fell in battle, leaving only the mid-day flag-raising to signal hope beyond death, and honor those who survived battle.