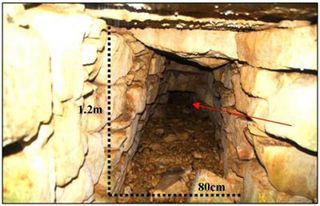 This is the interior of the Piedras Bolas aqueduct showing the abrupt reduction in conduit size near the exit.
(Image: © Kirk French; Penn State)

A water feature found in the ancient Mayan city of Palenque, Mexico, is the earliest known example of plumbing with pressurized water in the New World, researchers suggest.

Found in the Piedras Bolas Aqueduct is a water spring-fed conduit located on steep terrain — a 20-foot (6-meter) drop from the entrance of the tunnel to the outlet about 200 feet (60 feet) downhill. The cross-section of the feature decreases from about 10 square feet (1 square meter) near the spring to about a half square foot where water emerges from a small opening. At the outlet, the pressure exerted could have moved the water upwards of 20 feet.

"The experience the Maya at Palenque had in constructing aqueducts for diversion of water and preservation of urban space may have led to the creation of useful water pressure," said team member Kirk French of Penn State University.

The researchers aren't exactly sure what the water-pressure feature was used for, but speculation includes a public fountain or a wastewater disposal system.

Previously, researchers thought that water-pressure systems entered the New World with the arrival of the Spanish, but this finding shows that closed channel water pressure systems were already present.

Underground water features such as aqueducts are not unusual at Palenque. Because the Maya built the city in a constricted area inhabitants were unable to spread out. To make as much land available for living as possible, the Maya at Palenque routed streams beneath plazas via aqueducts.

The feature was first identified in 1999 in the Maya city in Chiapas, Mexico. The area was first occupied sometime near the year 100, grew to its largest size during the Classic Maya period 250 to 600, and was then abandoned around 800.

The Piedras Bolas Aqueduct is partially collapsed so very little water currently flows from the outlet. French and his team member Christopher Duffy, also of Penn State, used simple hydraulic models to determine the potential water pressure achievable from the Aqueduct. They also found that Aqueduct would hold about 18,000 gallons (68,000 liters) of water if the outlet were controlled to store the water.

The results of the study are detailed in the May issue of the Journal of Archaeological Science. The research was funded by the National Science Foundation and the Foundation for the Advancement of Mesoamerican Studies.