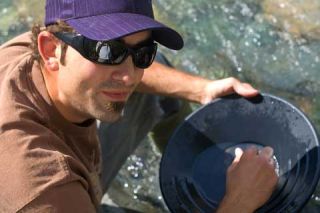 Take our poll below: Would you hock your wedding ring for extra cash?

With gold prices topping $900 an ounce and jobs still disappearing, a new gold rush is on. It's taking place in California again, where unemployed people are heading for the hills to prospect for gold. It's also happening on TV and online, where sometimes dubious ads promise rich rewards if you'll just hock your jewelry. And it's even creeping into a new kind of cocktail party that could only start in the Golden State.

And just like last time, the new gold rush can come with a mix of disappointment and, well, rush. The adrenaline kind, as one miner says.

"Some days you sit here and make two cents. Some days you make a couple of hundred dollars," said John Gurney, who like his crusty predecessors came from the East to find gold by digging around in California river beds.

The mineral gold is dense but highly flexible. It is virtually indestructible and extremely rare. All of the gold ever mined can fit into a cube with 72-foot sides, says Stuart Simmons, a researcher from University of Auckland, New Zealand who has studied how gold forms.

Today, Fort Knox holds 8-foot-tall stacks of gold bars worth some $130 billion, enough to bail out at least one large American corporation.

The original 49ers came California starting in 1848 when James W. Marshall found gold at Sutter's Mill in Coloma, now a ghost town. Soon 300,000 people flocked to the state. San Francisco became a boomtown and California gained statehood in 1850. Some early prospectors hit the mother lode, but most — especially those who came in the dwindling days of the phenomenon through about 1855 — spent as much or more on equipment as they ever extracted in precious metal.

Gold mining today, for the most part, is a big-business affair as the pickings are no longer easy. To extract enough gold flecks from a typical mine to make a single wedding band requires digging up at least 20 tons of rock.

The trick today is to dig deep. Where nuggets were once found in river beds, panners today report having to dig as much as 30 feet lower than the old timers did to strike it rich.

The real winner, as in the old days: A company that makes the equipment you'd need. Keene Engineering of Chatsworth, Calif., makes everything from plastic pans for riverbed sifting to large commercial gold mining rigs. Business has doubled, the owners report.

Others are simply digging into the jewelry drawer. Online pawnbroker Cash For Gold USA (you've seen the TV ads) says the company has grown "1,000 percent" in the past year, helped in part by the recession and plummeting TV ad prices, according to an article in the Christian Science Monitor. Who is selling their stash? "In the last two months we've seen an extraordinary amount of jewelry that typically is owned by the upper middle class," said Michael Gusky, CEO of GoldFellow, which also buys gold over the Internet.

Pawning jewelry is no longer necessarily a low-class affair conducted in a dusty shop in the bad part of town. GoldFellow's Web ad reads: "Want a new plasma HDTV? Sell us your gold today."

And the price of gold has inspired another phenomenon you might expect in California: gold parties. According to a report on the "CBS Evening News" this week, some Long Beach party-goers come not to get snockered but to get cash for their gold. Rings, necklaces and other jewelry is bought up by party organizers who recycle it so others can pay their bills.