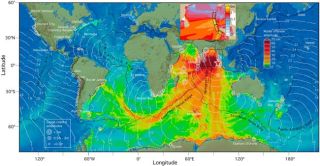 Global map showing the spread of waves from the 2004 Sumatra tsunami. Waves followed mid-ocean ridges all over the globe.
(Image: © Â© Science)

Waves from the Dec. 2004 tsunami traveled as far as Nova Scotia and Peru. Now scientists say that the waves followed mid-ocean ridges like train tracks to get there.

Using satellite imagery and computer simulations, scientists have shown that the Southwest Indian Ocean Ridge and the Mid-Atlantic Ridge – long mountain ranges on the seafloor – steered waves through the Atlantic Ocean.

The scientists, led by Vasily Titov of the National Oceanic and Atmospheric Administration (NOAA), also used tide gauges throughout the oceans to measure the height of the traveling waves. These readings yielded some surprising results in a detailed map.

Gauges near Callao, Peru and others near Nova Scotia actually measured larger waves than gauges near the Cocos Islands, which were much closer to the earthquake's epicenter. However, many of the gauges in the Indian Ocean either malfunctioned or were destroyed, so some of the largest waves may have been missed.

The two faraway sites closely correspond to the paths the waves took through the oceans. Gauges near these two sites, as well as in Manzanillo, Mexico, and Arica, Chile, all recorded waves with amplitudes over 20 inches, about the same amplitude as the waves passing the Cocos Islands. Each of these four sites is at the end of the paths of wave energy, which extend more than 12,000 miles from the earthquake epicenter.

As with a speeding train going into a turn, when the tsunami waves hit a sharp turn along the ridges part of the wave made the turn, but the rest derailed and shot off in another direction.

For example, waves traveling southwestward along the Southwest Indian Ocean ridge hit a sharp right turn when they reached the Mid-Atlantic Ridge, which veers north. Some of the wave energy made the turn towards North America, but a significant portion didn't and crashed into eastern South America.

Mid-ocean ridges did not, however, affect the course of the waves that did most of the damage in the Indian Ocean basin. Long and narrow initial seafloor deformations from the earthquake focused and directed wave energy.

While there were no reports of direct tsunami damage outside the Indian Ocean basin, this study – detailed today in the online version of the journal Science – shows how energy from localized earthquakes can travel throughout the world's oceans.

"Model simulations of tsunamis provide insight into open ocean wave propagation that cannot be determined from tide-gage readings along," the scientists write. "This is especially important for open ocean regions for which there are very few available data."

How Tsunamis Work Tsunami are sometimes called tidal waves. They are more like tidal surges, and they soar upon reaching land.

Complete covearge of the December, 2004 disaster and other tsunami research news.