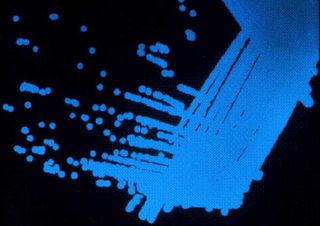 What do digestion, cholera and tooth plaque have in common? They're all made possible by quorum sensing, a form of bacterial communication. Like a switch flipping from disorganized individualism to unified communal behavior, quorum sensing allows bacteria to accomplish tasks none of them could do alone.

Bacterial cells make and release chemical signaling molecules into their surroundings. If there are cells of the same kind of bacteria nearby doing the same thing, the molecules accumulate, and the bacteria can count their neighbors by measuring how much of the chemical is around them. When they sense a large enough group, or a quorum, they start acting in synchrony.

{{ video="LS_110112_blinking-bacteria" title="Blinking Bacteria" caption="E. coli bacteria are engineered to blink on and off in synchrony, which could be used to track pollutants or the release of drugs into the body. Credit: Jeff Hasty, UCSC." }}

Quorum sensing is no simple phenomenon, says Bonnie Bassler, a National Institutes of Health-funded microbial geneticist at Princeton University who has been studying bacterial communication for more than 20 years and who uncovered the molecular signaling process that makes it possible. Employing many molecules and receptors in their chemical conversations, each bacterial species apparently has multiple quorum-sensing systems that involve hundreds of genes.

Bassler discovered that most bacteria appear to be, at a minimum, "bilingual" as well, using one common language to communicate with different bacterial species and other, unique languages to talk to siblings.

It wasn't until the 1960s — 300 years after the discovery of bacteria — that scientists detected quorum sensing, says Bassler. It came as a surprise, she adds, that lowly bacteria could act in coordinated groups, distinguish "self" from "other" and communicate with one another using a complicated chemical lexicon.

Today, researchers suspect that all bacteria use quorum sensing to control many collective behaviors, from assessing their own population size and distinguishing themselves from other types of bacteria to releasing toxins, mating, triggering disease and evading the human immune system.

In our own bodies, quorum sensing can be both a benefit and a danger. It allows some bacteria to help us digest food and produce vital nutrients. But it also induces other bacteria to form vast colonies called biofilms — such as the slimy residue coating teeth and bathtubs — that can lead to hard-to-treat lung, ear and tooth infections and clog medical implants. Research has shown that quorum sensing is partially to blame for cholera, cystic fibrosis, staph infections, tooth decay and food poisoning.

Making quorum sensing work for us

Listening in on this kind of cellular communication is helping researchers think about new strategies for controlling bacteria in human health and disease. Biologists, engineers, chemists and physicists have teamed up to develop molecules that enhance or disrupt quorum sensing. Their work could produce new antibiotics as well as biofilm-resistant materials for contact lenses, catheters and implantable medical devices.

Taking advantage of quorum sensing mechanisms, University of California, San Diego, bioengineer Jeff Hasty transformed E. coli bacteria into robust oscillators that blink on and off in synchrony. The synchronized oscillator represents a big step toward developing a sensor that could indicate the presence of pollutants or release drugs into the body when they're needed. That's because the engineered bacteria react to subtle changes in the environment by blinking faster or brightening in unison—all thanks to quorum sensing.