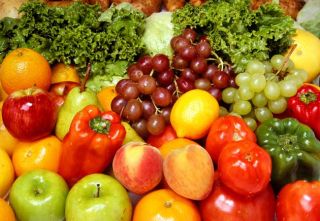 Even in your elder years, eating healthy foods can help you live longer, a new study suggests.

"Some people have suggested in the past that it doesn't maybe matter too much what people eat at an older age," said study researcher Amy Anderson, of the department of Nutrition and Food Science at the University of Maryland. "But our study, and previous studies, support the idea that that older adults can affect their health and longevity by following a dietary pattern that is high in healthy foods."

Anderson and her colleagues examined the eating habits and quality of life of about 2,500 adults, ages 70 to 79, from Pittsburgh and Memphis, Tenn. Participants answered a questionnaire designed to assess their typical diet. They also indicated whether their health was excellent, very good, good, fair or poor.

The researchers grouped the participants based on their diets:

Those in the healthy food group also reported more years of healthy life, when they rated their health as excellent, very good or good.

Interestingly, those who ate mostly meat and fried foods and drank alcohol did not have a higher risk of death than those who ate healthy food after the researchers took into account other factors that could affect the results, such as age, gender, race, education, physical activity and total calorie intake. It's possible that eating plant-based foods counteracted the deleterious effects of eating animal fat, the researchers said. Those who consumed meat, fried foods and alcohol also ate slightly more vegetables, fruits and whole grains than those in the high-fat dairy products group and those in the sweets and desserts group.

While previous work has linked diet to length of life, many of these studies aimed to score a person's eating habits based on how well they match up with a specific food regimen, such as the Mediterranean diet. But the new study examined participants' overall diets before classifying them into the appropriate groups.

Since participants all lived in two U.S. cities, the results don't necessarily apply to those living elsewhere, the researchers said. Also, the subjects' diet was assessed just once during the study, and the researchers don't know if eating patterns changed over time, Anderson said.

Those that ate healthy food closely adhered to the current dietary guidelines for Americans, which are aimed at reducing chronic disease, including heart disease and diabetes, she said. It's possible that those in the healthy food group had an extended life span because they had a reduced rate of chronic disease.

The results will be published in the January 2011 issue of the Journal of the American Dietetic Association.