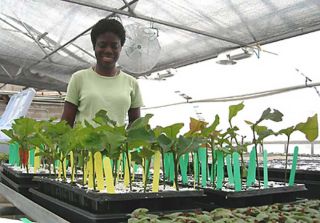 New York City is world famous as a showcase for designer clothes, shoes, and furniture. The latest designer item will be urbanite trees that can withstand the harsh inner-city setting.

Trees have it rough in New York. They have to withstand compacted acidic soils, road salt, and low hanging utility wires, to name just a few challenges.

Yet nowhere are trees more needed than in cities.

Trees improve urban life not only by providing natural beauty and shade but also by taking up carbon dioxide and releasing oxygen. They also reduce greenhouse gases and storm-water runoff and cut down on summer energy needs, said Andrew Hillman, the forester for Ithaca, where he oversees 14,000 trees.

In an effort to improve the survival chances of urban trees, scientists have developed a cloning technique that allows oaks to develop their own root system rather than having growers painstakingly use the grafting method, which involves propagation by joining plant parts.

The new method could develop trees that are easy to establish at nurseries and transplant to cities such as New York.

Oaks generally don't root from cuttings. For this reason, researchers from Cornell University have been working with an ornamental plant breeder in an effort to improve this tree's rootability

"We have combined native cold-hardy trees with much shorter southern and desert species that can tolerate heat, drought, compacted low-oxygen soil, road salt and the concrete-induced high pH soils common to cities," said Peter Podaras of the Landscape Plant Development Center in Mound, Minn. "Smaller-sized trees require less long-term maintenance and do not interfere with power lines. We believe these new, extremely vigorous hybrids have excellent potential as the ultimate street trees and for backyard landscaping."

About 200 combinations of oak were started at Cornell. Some of them are now six feet tall. The university is also growing maple clones that were crossed with a shorter, drought-tolerant Chinese variety that can be used in city settings. These varieties will be tested in Long Island and central and western New York later this year.