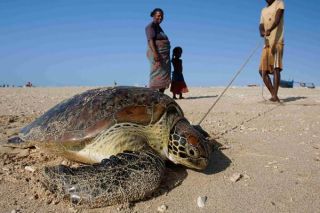 Endangered turtles are still caught and killed by the thousands in Madagascar despite a ban on the practice — up to 16,000 a year in just a single province of the island nation, according to a new study.

Researchers used some interesting tactics to arrive at the 16,000-turtle figure, a number they say is conservative. They enlisted the help of the villagers actually engaged in the turtle harvests, allowing the researchers to assemble what they are calling the first direct assessment of the practice.

Annette Broderick, from the Centre for Ecology and Conservation at the University of Exeter in England, said that despite the bans on catching the endangered turtles, it was clear small-scale fishing continued. She and her team set out to find out just how much of it was still going on.

"Because turtles are an endangered species, it's important for us to know what's going on in the region so we can work with the local community to find a sustainable way forward," Broderick said.

Since it has traditionally been very difficult to get data on the small-scale fishing that goes on in remote areas of Madagascar, Broderick, along with colleagues from Blue Ventures Conservation, called on the villagers themselves to track how many turtles they took.

The team had a local representative from each of 12 coastal fishing villages document and photograph every turtle that was caught over the course of a year.

"Catching turtles for their meat is an important part of Malagasy culture for many coastal people," said Blue Ventures Conservation's Frances Humber, "but the villagers also understand the importance of ensuring the future of this resource."

The researchers found that in the 12 villages studied, local representatives documented 699 turtles caught, most of them green turtles.

Combining that data with data from previous studies in the region produced a conservative estimate of an annual turtle catch in a southwestern province of Madagascar of between 10,000 and 16,000 turtles.

Humber said the figures from the study are a cause for concern, but insisted Madagascar should not be singled out, since the situation is likely similar throughout developing countries with tropical coastal communities.

"Until we get more details, it's difficult to draw conclusions about what is sustainable and how we can find solutions," Humber said. "Clearly, making turtle fishing illegal hasn't worked, so we need to work with communities to promote sustainable practices."

The research will be detailed in a future issue of the journal Animal Conservation.