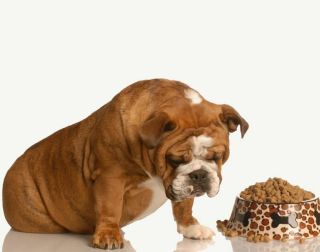 To avoid food-borne illness, don't feed Fido in the kitchen.

That's the advice of researchers from the Centers for Disease Control and Prevention, who reported in this week's issue of the journal Pediatrics that an outbreak of salmonella in 79 people between 2006 and 2008 was caused by contaminated dry pet food. The infections, half of which struck children, are the first known human salmonella cases linked to dry dog and cat food.

"This outbreak really raises concerns for us that dry pet foods might be an unrecognized source of illness, especially for children," CDC veterinary epidemiologist Casey Barton Behravesh told LiveScience.

Salmonella is a bacterium that causes fever, diarrhea and abdominal cramps. The bacteria are spread through contact with animal feces or consumption of food contaminated with feces. Most people recover from salmonella infection without treatment, according to the CDC, but the illness can be fatal to the very young and very old.

A cluster of salmonella cases first came to the attention of the Pennsylvania Department of Health in 2006. All of the infections were a particular strain of the bacteria known as Schwarzengrund, but initial investigations didn't find any other commonalities among those infected.

Then, in 2007, more cases turned up. This time, Pennsylvania officials contacted the CDC. Together with the Pennsylvania and Ohio Departments of Health and the Food and Drug administration, CDC researchers began to interview families affected by the outbreak as well as nearby families who weren't ill. They soon noticed a common thread of pet ownership among households with salmonella cases.

Because pet food usually contains meat, and meat can carry salmonella, the investigators turned to the families' dog and cat foods for clues. They found a variety of brands, but lot numbers stamped on the bags traced the food back to a common manufacturing facility in Pennsylvania owned by Mars Petcare US, according to a CDC website about the outbreak.

The investigators found salmonella contamination in the flavoring room of the manufacturing plant, where dry food was sprayed with flavor enhancers before being packaged. The company instituted a voluntary recall of more than 23,000 tons of pet food in 2007. When the outbreak continued in 2008, Mars Petcare US recalled all of its products and eventually shuttered its plant.

Salmonella can jump from pet food to humans in several ways, said Barton Behravesh. Pets can shed salmonella in their feces for up to 12 weeks after infection, even if the dogs themselves don't appear sick. Children might have also played with the pet food and then put their hands ⎯ or the food itself ⎯ in their mouths. But the researchers' interviews revealed equal reports of kids playing with or tasting pet food in both infected and uninfected households, suggesting something else was going on.

One of the strongest predictors of illness turned out to be whether the family pet was fed in the kitchen or not. For children under age 2, feeding a pet in the kitchen raised the risk of infection about fourfold. It's likely that the salmonella bacteria multiplied in dirty pet-food bowls, Barton Behravesh said, making cross-contamination and infection more likely.

Although the total number of cases was small, the outbreak emphasizes the need for caution, said Barton Behravesh. The researchers recommend hand-washing after coming in contact with pets or pet food. Pet food bowls and feeding areas should be regularly disinfected, Barton Behravesh said, and food bowls should be washed outside, not in sinks used for human hygiene or food preparation.