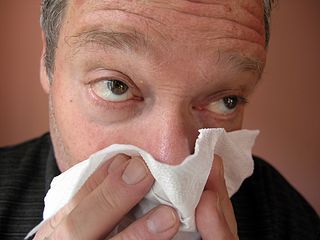 We're in the middle of one of the worse allergy seasons on record. But if you are one of the millions of Americans suffering from seasonal allergies, this isn't exactly a newsflash.

What might be news, though, is the fact that you don't have to suffer and you don't necessarily have to get doped up with prescription drugs to get you through the misery.

The first step is to understand what precisely is causing the allergy. That is, to say it's just pollen is analogous to saying germs cause disease. Knowing the type of pollen or whatever the trigger is will better enable you to minimize your exposure, avoid foods that might make the allergy worse, and find the best treatment. That treatment could be something as benign as saline drops.

Heavy early spring rains followed quickly by warm weather has resulted in unprecedented levels of tree pollen, a primary cause for seasonal allergies, resulting in itchy eyes, nasal stuffiness and runny noses. Some parts of the country have experienced record-breaking pollen counts.

You might be able to reduce exposure. This would entail avoidance strategies such as tuning into the reported daily pollen count; staying indoors during midday when the counts are the highest; washing your hair and changing your clothes more often; and wearing a mask.

But according to the American College of Allergy, Asthma and Immunology, two-thirds of spring allergy sufferers actually have year-round symptoms. Pollen might only be part of the problem. For this reason, you need to know your triggers. And this involves visiting an allergist.

Spring-blooming trees such as birch, maple, poplar, oak, sycamore and walnut are all notorious triggers, peeking at slightly different times in the spring. If you know your triggers, you might be able to avoid them all together.

Clifford Bassett, a practicing allergist and a faculty member at New York University School of Medicine, recommends a three-tier approach to relief: the aforementioned avoidance; then medicine ranging from benign water or saline solution to prescription drugs; then (if all else fails) immunotherapy via injections.

Nasal irrigation, or washing out your nose once or twice daily with warm salt water, can be quite useful. You can use a cheap bulb syringe or a more expensive neti pot. Videos abound on YouTube demonstrating this, and there are plenty of rigorous science studies justifying the comical-looking practice of funneling water in one nostril and out the other. Just don't do it with milk.

Oregano oil is a popular word-of-mouth remedy, but there are absolutely no scientific studies supporting its use, and you run the risk of smelling like a pizza shop for no good reason.

Medication can be quite effective, Bassett said, and he's surprised by how many people shun it (and shun seeing an allergist), opting instead to suffer through the season. Bassett said there's sometimes a perception that treatments don't work because of "nasal priming," the phenomenon in which fewer and fewer allergen particles are needed to trigger symptoms. But this is a result of a hyperactive immune system, not the medication.

Common allergy medications such as antihistamines or corticosteroids only treat your symptoms. Immunotherapy, in contrast, entails gradually introducing the offending allergen to the body so that you can build a normal immune response to it.

Pollen allergies can be exacerbated by certain foods. Carrots and celery can make grass pollen allergies worse; many fruits and vegetables, particularly those not in season, can make the spring tree pollen allergies worse. This is called a cross reaction, and this is due to the fact that the immune system — already running amok with pollen — might confuse these food proteins with pollen proteins. An allergist, Bassett said, can help you strategize a course to relief.

It's all a matter of understanding the specifics of your misery. Knowledge, like much of the pollen coating your street, is golden.