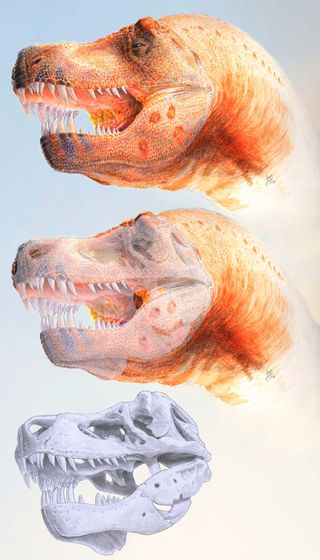 A reconstruction of the Trichomonas-like infection of the T. rex commonly known as "Peck's Rex." Note the yellowing at the back of the mouth and the lesions in the jaw that penetrate the full thickness of the bone.
(Image: © Chris Glen, University of Queensland)

More than 200 million years ago, as North Africa was ripping away from North America, opening up the Atlantic Ocean, hot lava poured out from Earth's surface. The lava, enough to more than cover the United States, created inhospitable conditions for most life ... except the dinosaurs.

And new geologic discoveries suggest this climate catastrophe was the ticket for the dinosaur's rise to rule.

At that time, about half of all species on Earth died out in what is called the end-Triassic extinction. Scientists have suggested massive volcanic eruptions could be to blame, spewing out lava and greenhouse gases such as carbon dioxide that would have totally changed the climate.

The new research, detailed this week in the journal Proceedings of the National Academy of Sciences, makes a firm case for volcanoes as the culprit but also pieces together other evidence for how the volcanic scenario led to dinosaurs dominating the landscape.

"The big thing is many people have heard why dinosaurs went extinct," said study researcher Jessica Whiteside, paleontologist and assistant professor of geological sciences at Brown University in Rhode Island. But the question 'Why they came to be' is much more exciting."

In addition to looking at an uptick in life rather than its demise, the researchers also took a unique approach to fossil hunting. Their finding is based partly on chemical fossils rather than the beasts' bony remains.

Whiteside and her colleagues specifically looked at the ratio of two carbon isotopes, or atoms of the same element that have a different number of neutrons, in the wax of ancient leaves and wood found in lake sediments mixed with volcanic material called basalts. The samples came from eastern North America and England. They found the lighter isotope called carbon-12 was higher relative to the heavier carbon-13, a signature of a volcanic eruption.

Here's how it works: At the time, the continents were stuck together into a supercontinent called Pangea. The giant block began to break up as the North American and the African plates began to drift apart. As the two plates parted ways, fissures formed, releasing massive outflows of lava.

The carbon dioxide gas that spewed out with lava is known to have a high carbon-12 amount relative to the heavier isotope. Plants then take up that gas when photosynthesizing and forming new plant material. And so the presence of plants with lots of the lighter carbon suggests they sprouted in the wake of the eruptions.

Results also showed about half of plant species perished, along with a spike in fern spores around the time of the first lava flows, which makes sense since ferns are among the first plant species to pop up in an environment scarred by volcanism.

Next, the team matched up the timing of the eruptions with the disappearance of a group of reptiles called crurotarsans from past research using footprints of the animals found in the same rocks. Crurotarsans were dinosaurs' main competitors during the Triassic period

After the lava flows, the "fossil record for crurotarsans is nearly completely gone," Whiteside said.

As for how the reptiles, plants and other species died out, Whiteside said the volcanoes may have caused various lethal changes to the environment. "Changes to the pH of the oceans, which killed most of the animals that make shells, and this greenhouse warming would likely have decimated many of the reptiles, including dinosaurs' main competitors," she told LiveScience.(The pH measures the acidity or alkalinity of a substance.)

Without competition for food, early meat-eating dinosaurs like Tyrannosaurus rex and Velociraptor took over, the researchers speculate. Study researcher In a past study, Paul Olsen from the Lamont-Doherty Earth Observatory of Columbia University, who was part of the research study team, showed that theropod (meat-eating dinosaurs) footprints after the Triassic mass extinction had become much larger, corresponding to larger body sizes.

It's still a mystery as to why these early dinosaurs even survived the volcanism, let alone thrived, Whiteside said, "It's really that it was just a fortuitous combination of traits that they unwittingly possessed that let them get through the catastrophic climate change that their competitors didn't have."