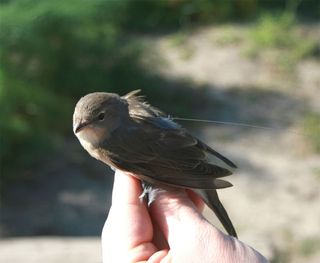 Fat birds of a certain species migrate faster than thin ones because they spend less time re-fueling their fat reserves, a new study suggests. Here a garden warbler, a small migrating bird, with a radio transmitter used to monitor its travel.
(Image: © Wolfgang Goymann, The Max Planck Institute for Ornithology.)

A little extra weight may be a good thing if you're a small migrating bird. Fatter birds of certain species migrate faster than thinner ones, because the chubby birds need less time to stop and replenish their fat reserves, a new study suggests.

The study looked at the garden warbler, a small bird that makes an annual journey from central and southern Africa to its breeding grounds in Europe. The bird typically makes stopovers over the course of the journey to replenish fat reserves that provide an energy store for its travels.

To figure out whether the birds with extra flab had any advantage over their svelte buddies, the researchers fitted 10 fat birds and 10 thin birds with temporary adhesive radio transmitters. That morning, the birds had landed for a stopover on the Italian island of Ventotene. Then, the researchers monitored, at regular intervals, whether the signal emitted by the transmitters could still be heard on the island (to figure out the stopover time).

Nine out of the 10 fat birds flew off the island on that same night. But the thin birds remained on the island an average of 40 hours before resuming their journey.

The results show that the duration of a bird’s stopover is not just influenced by environmental factors, such as wind and weather conditions, or the innate urge to migrate.

However, the researchers assumed that the birds they caught and used for the study had just arrived on the island that day. But they believe their results are a reasonable estimate of the birds' behavior.

The findings demonstrate the importance of ecologically-intact resting grounds: The birds can only replenish their energy reserves quickly and move on if they can rest in areas with sufficient supplies of insects, nectar and pollen, the scientists say.

The study was conducted by Wolfgang Goymann, a researcher at the Max Planck Institute for Ornithology in Seewiesen, Germany, and his colleagues in Italy. The results were published in online Feb. 17 in the journal Biology Letters.