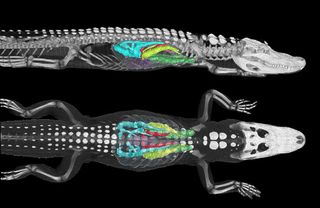 Computerized tomographic (CT) X-ray images of side and top views of a 24-pound American alligator, with 3-D renderings of the bones and of airways or bronchi within the lungs. A University of Utah study found that air flows in one direction through a gator's lungs. It flows from the first-tier bronchi through second-tier bronchi (blue), then through tube-like third-tier parabronchi (not shown) and then back through other second-tier bronchi (forest green).
(Image: © C.G. Farmer and Kent Sanders, University of Utah)

This similarity in breathing style may have arisen in a distant common ancestor of both animal groups, the researchers who made the discovery think, and may explain why that ancestor and one group of its descendants, dinosaurs, came to rule the world (at least for awhile). In fact, the finding could provide evidence for why these dinosaurs came to dominate the land at a time when the air had much less oxygen than it does today.

The discovery and its implications for our understanding of the development of life on Earth millions of years ago are detailed in the Jan. 15 issue of the journal Science.

In the lungs of humans and other mammals, air flows in and out like the tides at the beach. When air is inhaled, it moves through tiers of progressively smaller branching airways called bronchi until dead-ending in the smallest, cul-de-sac-like chambers of the lungs, called alveoli. There, oxygen enters the blood, carbon dioxide exits it, and the air flows back out.

Farmer and her colleagues did three experiments to test out this new idea and to see if air did indeed flow only one way in alligators:

·         She performed surgery on six anesthetized alligators and inserted flow meters, which measure the direction and speed of airflow, into their lungs.

·         She also pumped air in and out of lungs removed from four dead alligators and monitored the flow.

·         Lastly, using lungs from another dead alligator, she pushed and pulled water through the lungs with tiny fluorescent beads, making movies to show the direction of flow.

All of these experiments showed the same result: The air flowed through the lungs in just one direction.

The unidirectional flow is caused by aerodynamic valves in the lungs: Air is inhaled through the trachea, or windpipe, then flows into two primary bronchi, or airways, each of which enters one of the alligator's lungs. The bronchi branch into narrower airways, the first of which is bypassed by the incoming air because that branch makes a hairpin turn that acts as an aerodynamic valve; instead, the air flows into other bronchi, and down into even smaller airways where gases are exchanged with the blood.

The air, still moving in one direction, then flows from the smaller bronchi into the bypassed airway and then out of the lungs, completing a one-way loop.

Part of the reason that many scientists didn't think alligators would have this one-way flow of air is that they lack the air sacs that birds have, which had been thought to be necessary to create unidirectional flow. Farmer says she has proved this idea wrong.

"They cannot argue with this data," she said. "I have three lines of evidence. If they don't believe it, they need to get an alligator and make their own measurements."

Rise of the dinosaurs

The finding has implications for our understanding of ancient life-forms, because alligators and birds share a distant common ancestor.

After a mass extinction event that occurred 251 million years ago — called "the Great Dying" — a group of creatures called archosaurs (Greek for "ruling lizards") became the dominant land animals on Earth. This group eventually evolved into two major lineages: crocodilians, the ancestors of modern crocodiles and alligators, and the branch that produced flying pterosaurs, dinosaurs and eventually birds.

If both alligators and birds have unidirectional airflow in their lungs, that would imply that such a breathing pattern evolved in their common ancestor, the archosaurs, before the two major branches split around 246 million years ago.

This new understanding could explain why archosaurs came to dominate over the group of mammal-like reptiles (and from which modern mammals descend), called synapsids, that had ruled the Earth before the Great Dying. After the mass extinction event, the recovering ecosystem on Earth was warm and dry, with oxygen levels in the air perhaps as low as 12 percent (compared with today's 21 percent).

Even with less oxygen in the air, "many archosaurs, such as pterosaurs, apparently were capable of sustaining vigorous exercise," Farmer said. "Lung design may have played a key role in this capacity because the lung is the first step in the cascade of oxygen from the atmosphere to the animal's tissues, where it is used to burn fuel for energy."

This lung design in modern birds also improves oxygen delivery, since birds can fly at altitudes that would "render mammals comatose," Farmer said.

The only big animals on Earth at this time were the archosaurs, while synapsids didn't come in forms any larger than an opossum.

Just why the dinosaurs came to out-compete other archosaurs, though, can't be explained by the new findings.